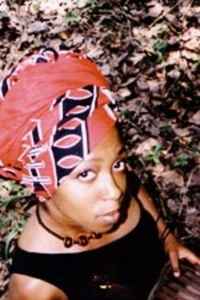 Real Name:
Chiwawiniso Chaapocho Maraire
Profile:
Chiwoniso was born in Olympia, Washington, U.S. on March 5, 1976, the eldest in what would grow to be a family of five. Her father, Dumisani Abraham Maraire, taught marimba and mbira in America between 1972 and 1990, while Mai Chi Maraire, her mother, was a soulful singer, dancer and traditional drummer. Her brother is Tendai Maraire.

In 1990, when she was age 15, Chiwoniso’s family relocated back to Zimbabwe, where she went on to enroll as a student at Mutare Girls High School before joining her first musical group, A Peace Of Ebony. P.O.E, whose members came from Zimbabwean, German, American, Russian and Malawian ethnic backgrounds, were a group which redefined the essence of international African rap. Composing their lyrics in English, Shona and French, they used the sounds of the mbira and marimba as the core of most of their revolutionary recordings.

Barely three short years later Peace of Ebony was recognized by Alliance Française Harare, and as a result entered the Radio France International contest, “Les Découvertes”, in 1994. The group won the ‘Best New Group out of Southern Africa’ award and were invited to perform in Madagascar, where they were offered a recording contract by the French-based company LusAfrica Sarl.

In 1995, Keith Farquharson, who had worked with Chiwoniso on the Peace of Ebony project, introduced her to a Zimbabwean guitarist by the name of Andy Brown. They recorded the album ‘Let The Children Play’, after which Andy Brown returned to South Africa, where he was working from. Four months later Andy came back to Zimbabwe and asked Chiwoniso to join his group, The Storm, and she accepted.

1999 saw Chiwoniso leading the Storm at the MASA festival in Abidjan, Côte d’Ivoire, where she won the UNESCO Price for Arts. In the same year, she was one of the nominees for the KORA Best Female Vocals of Africa Awards.

In mid-2001 Chiwoniso pulled out of The Storm to concentrate on a solo career. She is now fronting her own band, Vibe Culture, which has quickly become one of the most popular in the Zimbabwean music community. She is also a singer and performer in the multi-national all-women’s band Women’s Voice, whose members hail from Norway, Zimbabwe, Tanzania, America, Israel and Algeria.

On 24 July 2013, it was announced that Chiwoniso had passed away at the South Medical Hospital in Chitungwiza on Wednesday evening after being admitted with a lung infection.
Sites:
MySpace, Facebook
In Groups:
A Peace Of Ebony, Nyunga Nyunga Mbira
Variations:
Viewing All | Chiwoniso Maraire
C Maraire, Chi Maraire, Chiwoniso, Na Chi - Maraire