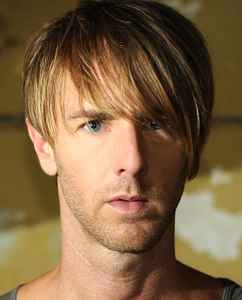 Real Name:
Richard Michael Hawtin
Profile:
Canadian (British born) producer, label manager and DJ, born June 4, 1970. Although mainly influenced by Detroit techno, Hawtin has developed his own style ranging from harder noisy techno to deep minimal abstract acid, particularly under his best known alias Plastikman. He was involved in the development of the Final Scratch digital DJ technology and has continued to use new technology as it becomes available.

December 26, 2019
Digitalism is not my cup of tea at all. Supposed to bring abilities and fresh new ideas, made EDM worst, tons of crap to new releases prove that. But i have to admit that this guy is a league of it's own. Hard working man, exploring at any section, a true artist. Like him or not, he is a pioneer.
Reply Notify me 4 Helpful

Brilliant documentary on his life I did once see... I grew up in Buckinghamshire.... To be that close to Banbury,... It's a good feeling ;)

November 24, 2016
once a pioneer of real, radical minimal techno now, as stated, just another cog "in a commercial typhoon".
those 90s Plastikman works though.... a real musical revolution.
Reply Notify me 4 Helpful

Saying he is "one of the founders of electronic music" lol... ever heard of Kraftwerk, Morton Subotnick or Stockhausen?
But yes, his contributions to the scene as Plastikman are seminal and timeless but what he plays now as Richie hawtin is utter shite!!!

August 10, 2014
Richie Hawtin was one of the father founders of Electronic music with Jeff Mills, Laurent Garnier and Sven Vath, but in the recent years, I think he has passed the line and he is in another world. I prefer to remember Plastikman on 90's and 2005 maximum. Now he is involved in a commercial typhoon.
Reply  See 2 replies Notify me 10 Helpful

July 13, 2012
Richie Hawtin is the amBASSador of our fantasies. It is impossible to transfer what is going on in our heads to a "normal" night at the club, so due to this his releases, which seem to be all very conceptual, are brilliant. His live DJing is "only" extraordinary. To me, he is one of my leaders. Thank you Richie Hawtin for giving me so much inspiration during the last twenty years.
Reply Notify me 1 Helpful

October 3, 2002
Richie Hawtin is definatly a VERY talanted DJ and Producer.
His mixing is so unbelievaley clean and perfect and as for his production, well,..don't get me started!! hehe

I have always enjoyed this richie and he is definatly one of the true techno pioneers to ever exist!

I heard him play and he was playing very good quality techno, but he wasn't as good as i had heard. I hope to see him come out to Aus again sometime soon for i wanna hear his talent once again.
Reply Notify me 2 Helpful

In 1996 I bought my own very first CD in the fameous music store "USA Import" in Antwerp, Belgium, without really knowing what it was. Pre-listening didn't help much since every track took a while to open up. The CD was called 'Recycled Plastik' from Plastikman.

I listened to it a few times, and then gave it to my dad who didn't enjoy it much though he's fond of electronic music. After a few weeks I asked if I could have the CD back. I thought it would only be useful to sample some of the drums on it or something. My dad lost it somewhere, and he couldn't tell me why.

Four years later, my dad rang. He said he found that CD back that he lost. It turned out that it got stuck somewhere inside his player, and after opening it up for some other reason he found it between the drive mechanism and the electronics inside the case. So I got my CD back. By that time I thought the music would be completely outdated, and my taste moved from Jarre to Techno. Turned out the last track on it, Spastik, was even then spectacularly popular in clubs in Belgium and beyond. I was so proud I still had that CD, and even know when it's my turn to perform on a party I use that track when the time is right (around 4-5am).

I've been buying Plastikman tracks ever since, and I've been to a few performances of Ritchie on stage. I think that he performs better as a DJ mixing other people's music, but I can appreciate his minimalist records.

He's truly a role model and an inspiration to a lot of artists. He deserves every attention he's getting now.
Reply Notify me 7 Helpful