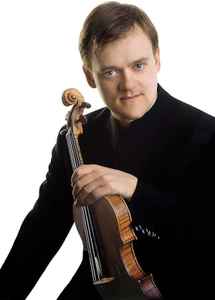 Born in Duisburg, Germany, Frank Peter Zimmermann started playing the violin when he was five years old, giving his first concert with orchestra at the age of ten. Since finishing his studies with Valery Gradov, Saschko Gawriloff and Herman Krebbers in 1983, he has performed with major orchestras all over the world, collaborating with the world’s most renowned conductors. His many concert engagements take him to important concert venues and international music festivals in Europe, the United States, Japan, South America and Australia.

Frank Peter Zimmermann is also a keen chamber musician and recitalist. His interpretations of the classical, romantic and 20th-century repertoire have been received with great critical and public acclaim. His regular recital partners are the pianists Piotr Anderszewski, Enrico Pace and Emanuel Ax. Together with the viola player Antoine Tamestit and cellist Christian Poltéra he is a member of the Trio Zimmermann. This ensemble has performed in Amsterdam, Brussels, Cologne, London, Lyon, Milan, Munich, Paris and Vienna, as well as during the festivals in Salzburg and Edinburgh, and has released acclaimed discs of Mozart and Beethoven on BIS.