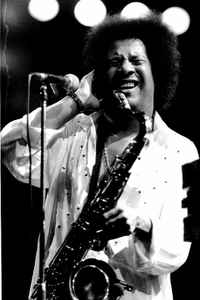 Real Name:
Gaetano Senese
Profile:
James Senese is an italian saxman who became famous in the ’60s with a band called “the Showmen”.
In the ’70s he became internationally famous playing in a jazz-rock band called Napoli Centrale which involved some other artists as Tony Walmsley, Mark Harris, Franco Del Prete and Pino Daniele.
Since the ’80s he has been playing as a solo or cooperating with other singers and musicians as Gil Evans, Roberto De Simone and the Art Ensemble of Chicago.
His masterpieces are: “Napoli Centrale”, “Mattanza”, “Qualcosa ca nu’mmore”, “Hey James”.
Here’s a quote from his biography “Je sto ccà” written by Carmine Aymone: “I was born as a blackman and I was born in Miano, I play sax, I play it half way between Naples and Bronx, I study John Coltrane all day long, I fell in love with Miles Davis and Weather Report and I always create by instinct, trying to find a language of my own, never imitating. My Sax bears the scars of life’s joy and sorrow.
Sites:
jamessenese.it, MySpace
In Groups:
I 4 Con, James Senese Company, James' Napoli Centrale, Napoli Centrale, Showmen 2, The Showmen (2), Vito Russo E I Conny
Variations:
Viewing All | James Senese
G. Senese, J. Senese, J.S., James, James King, James Senese & Napoli Centrale, Senese