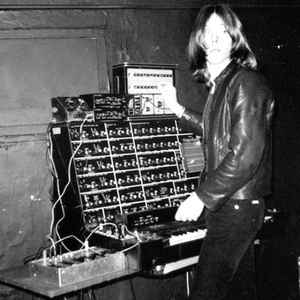 Profile:
Chris Carter was born in the City of London on 28 January 1953. In 1967, whilst still at school, Carter played bass guitar in a band called The Dragsters. Carter attended Friern Barnet Grammar School between 1964-1966, before moving on to Winchmore Hill County School which he attended until April 1969.

His first solo gig, under the name Waveforms, took place at Thurrock Technical College on 13 March 1975. He then toured the show around the university and college circuit.

John Lacey told P-Orridge and Tutti who had formed COUM transmissions about Carter and they were immediately intrigued; he sounded perfect for the group. They arranged a meeting, everything clicked, and from then on Carter became a regular visitor to the studio. And so it was, during the summer of 1975, that the COUM story became complicated by, and intertwined with, the TG.

While his personality seems to attract way less attention than Gen, Sleazy, or Cosey, Chris was truly the mastermind and beating heart of TG from a purely musical standpoint. Sleazy was almost shockingly innovative as well (his DIY cassette-based "sampler" springs to mind), but Chris is just pure genius as far as I'm concerned. And that's why Chris & Cosey (plus all their pseudonyms) are my favorite of the post-TG groups. It's a shame that they seem to get less love than PTV or Coil... some of their stuff is phenomenal. And as far as Carter's solo discography goes, his first release "The Space Between" is a perennial favorite of mine. Highly recommended for fans of early industrial and/or electronic music enthusiasts in general. It will not disappoint.

Hi, Mr.Carter. I'm Big fan Your music. But... Maybe it is stoopid question: what fonts You"re used in CTI ‎– Electronic Ambient Remixes One? It Really need me. Anyway, Thax!