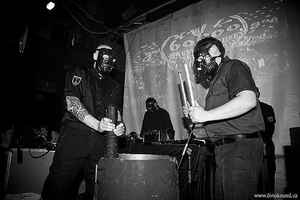 Profile:
The group Genocide Organ joined forces in 1985. Their live performances are rare, involving metal junk and blow torches to build a wall of industrial noise. Almost all Genocide Organ records are out of print and, due to the small number of copies pressed.
Genocide Organ members are wrapped in mystery, the real names are unknown, during their live performances they are used to wearing masks and hoods to hide their identities. Records are credited to the pseudonyms of Wilhelm Herich, Doc M. Riot and D.A.X. Roland Freisler (now active as Diutesc) was one of the two live frontmen together with Wilhelm Herich; in the band since 1989, he left the band in 1999 and his role has been taken by Brigant Moloch of Anenzephalia.

Brilliantly minimal, focused, and absolutely unforgiving, I have had a love/hate relationship with this group for years. They are not music for all moods or tastes. Seriously something from way beyond the edge, even for power electronics. Far stronger than the simple vail of hate propaganda, and certainly not the white supremacists people take them to be, G.O. challenge the notion of what it is to have a belief, the nature of political and self control, and operate to convince the listener to only take orders from himself. An essential, empowering post-industrial group.