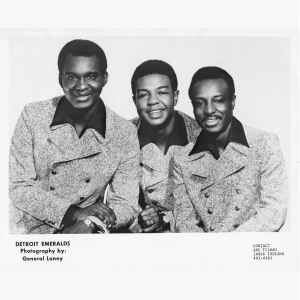 Profile:
American soul group. Initially formed as “The Emeralds” in Little Rock, Arkansas, in the 1960s by the four Tilmon brothers Abrim, Ivory, Cleophus, and Raymond.
In the late 1960s Abrim and Ivory Tilmon with James Mitchell (2) moved to Detroit and reformed the group as the “Detroit Emeralds”. They signed with Westbound Records in 1970. Between 1971–1973 their backing band were Chapter 8. Their best known songs were “Feel The Need In Me”, “Do Me Right”, “You Want It, You Got It” and "Baby Let Me Take You (In My Arms)”. In the mid-1970s the group began to fall apart and in 1977 Abrim Tilmon hired Paul Riser, Maurice King and Johnny Allen as permanent members. By the late 1970s there were two parallel groups performing live as the (Detroit) Emeralds. Former members James Mitchell (2) and Marvin Willis formed the disco-soul group The Floaters.
Sites:
Wikipedia, allmusic.com
Members:
Abrim Tilmon, Ivory Tilmon, James Mitchell (2), Marvin Willis
Variations:
Viewing All | Detroit Emeralds
Detriot Emeralds, Detroit, Detroit Emeralts, The Detroid Esmeralds, The Detroit Emeralds, The Detroit Esmeralds