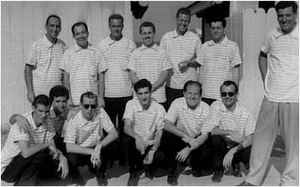 Profile:
The Commanders (aka The Commanders Big Band) was formed by drummer Eddie Grady and Tutti Camarata as a recording project and "road band". Eddie Grady was a child star drummer who moved through many bands before becoming an established studio session drummer. His studio experience led to the formation of The Commanders.
The Commanders toured for the 3 years between 1954 to 1957, playing the major ballrooms from coast to coast.

The original band had the 4 trombones in the front row. The second row consisted of 3 trumpets and two saxes (alto and a tenor who doubled on bass sax). The rhythm section were the drums, bass, piano and guitar.

SAXES
Paul Gaglio - Alto - He was featured quite often.
Lou Lindholm - Tenor and Bass Sax - He was also featured on record dates on the bass saxophone.

Other Members (studio and tour)