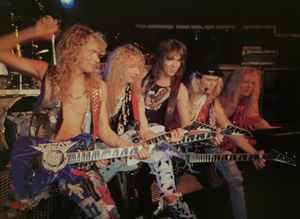 Profile:
TREAT or "THE TREAT" as they called themselves at first was formed by Robert Ernlund (vocals), Anders "Gary" Wikström (guitar) and Leif "Lillen" Liljegren (guitar) in Stockholm, Sweden in 1982, but they had all been playing together since early 1981 in The Boys (14), a more straight ahead rock band who sang in Swedish only and recorded one album.

Well... It all actually begun back in 1977 when Ernlund fronted his big brother Göran's band "Sprängdeg" a rock'n'roll act that never recorded anything but played a whole lot of live gigs in and around the Stockholm area. Liljegren, who played with Heavy Load (2) for a couple of months, joined them in late 1980 and the above mentioned members became "The Boys" who later went on to record a demo tape as "THE TREAT" which by the way got turned down by every single label they sent it to in late 1982.

It wasn't until drummer Mats "Dalton" Dahlberg (ex-Highbrow, Power (7)) joined the guys in the summer of 1983 that things started to happen. Dalton had some contacts within Swedish Polygram who at the time was looking for a new Swedish hard rock band to sign. At the same time, bass player Tomas Lind joined The Treat and the five of them began to record new demo songs together in the Polygram studio. They all said in early interviews that they were influenced by bands such as Journey, Foreigner, Def Leppard, Boston, KISS, Whitesnake and Van Halen.

Lind left the band in early 1984 and he was replaced by Kenneth Sivertsson, a 25 year old bassist who before had played with Factory, a pop band that sang in Swedish and had a couple of really big hits between 1978-81 (I'm sure that many Swedes still remember "Efter Plugget"). They changed their name from "The Treat" to simply just "Treat" and the first single "Too Wild" was released back in May 1984.

They toured all over Sweden in the summer of 1985 and everything seemed to be hunky-dory in the Treat camp, before "disaster" struck down without a warning. Drummer Mats "Dalton" Dahlberg suddenly left the band without a notice or explanation in August 1985! He later formed his own band Dalton (6) who released two pretty good melodic albums (THE RACE IS ON - 1987 & INJECTION -1989) which had songs co-written by both Jon Bon Jovi & Michael Bolton etc. The new drummer Leif Sundin, who had his roots in jazz music and whose father was a well known jazz musician in Sweden, was maybe a strange choice for a hard rock band even if Sundin played with Six Feet Under (2) for a while! Things did not work out with Leif Sundin and he left (or got fired from?) the band in August 1986. His replacement Jamie Borger was yet another ex-Six Feet Under (2) drummer (popular band huh?) who also played with Capricorn (16) (with Mats Leven as vocalist) and SWEDISH BEAUTY (who later became Swedish Erotica) in the past.

DREAMHUNTER (1987) may be the album everybody talks about when it comes to Treat, as its reputation and the fact that the original CD is very rare (it has been re-released now though), makes this is a collectors item for melodic fans. But...maybe its reputation is better than the album itself?
Sites:
Facebook
Members:
Anders Wikström, Fredrik Thomander, Jamie Borger, Joakim Larsson, Ken Siewertson, Kenneth Sivertsson, Leif Liljegren, Leif Sundin, Mats Dahlberg (2), Mats Levén, Nalle Påhlsson, Patrik Appelgren, Pontus Egberg, Robert Ernlund, Tomas Lind
Variations:
Viewing All | Treat (2)
トリート