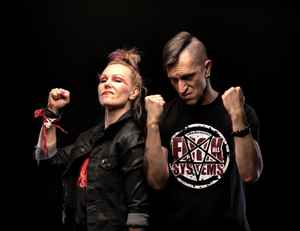 Profile:
AMBASSADOR21, the often imitated but never equaled industrial duo from Belarus. Throughout the past years, Nataliya Protasova aka Natasha A Twentyone and Alexey Protasov have clearly put their mark on the industrial scene with their harsh, relentless sound and their explosive live performances.
All their lives Natasha A Twentyone and Alexey Protasov have been associated with music, been involved with local punk bands from their teenage years. Later they became well-known radio DJs on the biggest commercial station in Belarus, still they continued to promote all kinds of alternative music. Then one day they just decided to stop all other work, not be part of the system and be only musicians. Independence is not the easiest way, but the choice was made. December 2001 AMBASSADOR21 was born.
In 2002 Ambassador21 founded their own record label Invasion Wreck Chords (renamed to Invasion in 2009). In 2002 AMBASSADOR21 founded their own record label Invasion. During AMBASSADOR21 existence they released bunch of full-length albums, EPs and lots of tracks and remixes for Invasion, Metropolis, Hands, Ant-Zen, Pflichtkauf, Audiotrauma, Out Of Line, PRSPCT, Industrial Strength, Vendetta Music and more.
AMBASSADOR21 toured a lot all over the World since 2003 and performed at many events: festivals like M'era Luna, Wave-Gotik-Treffen, Kinetik Festival, Maschinenfest, E-tropolis, Forms Of Hands, PRSPCT XL, PRSPCT RVLT, Baroeg Open Air, Castle Party and many gigs across Europe.
New album "Art Off. Destroy" will be released in 2021, the year of AMBASSADOR21 20th Anniversary on Invasion Wreck Chords.
Sites:
ambassador21.com, Facebook, SoundCloud, Twitter, YouTube, Bandcamp, mixcloud.com
Aliases:
Illegal Trade, Suicide Inside
Members:
Alexey Protasov, DJ Knüppel, Natasha A Twentyone, Olivier Pesquié, Zoé Herrschaft
Variations:
Viewing All | Ambassador 21
A21, Ambassador-21, Ambassador21