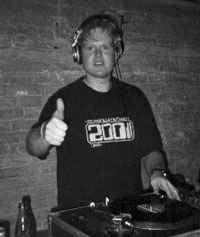 Real Name:
Andreas Kremer
Profile:
Andreas Kremer can already look back at 10 years of ”Electronic Music” achievements. He has shown a keen interest in electronic music since he was a child. He inherited his talent and musical understanding from his father, who himself was a successful musician for a number of decades. Growing up in a musical family resulted in Andreas releasing his first recording at the age of 16. Followed by a variety of DJ gigs and a booking as resident DJ at the ”M” in Mainz
which no longer exists.

Andreas's past and current productions have earned praise for their impressive sound quality and are produced in his studio near Frankfurt. Working with a G3-MAC Computer and an arsenal of synthesizers like the Juno 106, the Oberheim OB8 and a Minimoog enable him to build the virtual synthesis and sound mix that give his tracks a professional quality while still allowing them to take on a life of their own. Andreas has appeared in many clubs around the world. His tours through the United States, Canada, Italy, Spain, Denmark, England, Switzerland, etc, let him prove his talent and have made him an internationally known artist.
Sites:
MySpace
Aliases:
A. Crash, ADK, Alfred Bitchcock, Andreas Kremer vs. A. Crash, Maximum Punishment, Mayhem Man, Nicklas Samström
In Groups:
Andreas Kremer & Harald Klotzberg, Andreas Kremer And Friends, Frühschicht
Variations:
Viewing All | Andreas Kremer
A. Kremer, A.Kremer, Andreas Kramer, Anḋreas Kremer, Kremer, Andreas

March 25, 2004
Andreas Kremer and his hard distorted kick lead most to believe that his productions are not clean. If you listen to his work on a bad system it's obviously not going to sound clean. I like alot of his tunes because of that hard dirty distorted style, the same reason that most people diss him.

March 4, 2004
andreas kremer is definately a great producer. everything on his working vinyl label is pure fire... nothing but dirty techno... no weak pussy shit here