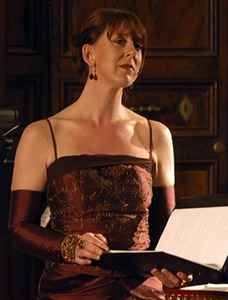 She grew up in Hjärtlanda, five kilometers south of Sävsjö. She studied at the Royal Academy of Music in Stockholm, at the Schola Cantorum Basiliensis in Basel, Switzerland and for the soprano and singing teacher Jessica Cash at the Guildhall School of Music and Drama in London. She debuted as an opera singer in 1991.

She is mainly active in early music and has collaborated with, among others, Christopher Hogwood and the Academy of Ancient Music, Bach Collegium Japan and Masaaki Suzuki, Roy Goodman, Nicholas McGegan, Lars Ulrik Mortensen, Harry Bicket, the vocal ensemble Cantus Cölln and the wind ensemble Concerto Palatino.

Susanne Rydén has participated in recordings for TV and radio and almost a hundred record recordings. Her first solo album was Bella Madre de 'Fiori for Prophone, Italian music from the 16th century to the 18th century, which was recorded in May 1990.

She has visited Drottningholmsteatern, Norrlandsoperan and various independent opera stages, in roles such as Poppea in Monteverdi's Poppea's coronation, Dido in Purcell's Dido and Aeneas, Angelica in Handel's Orlando, Galathea in Handel's Acis and Galathea, Ghita in Vicente Martín y Solers' Una cosa rara, in Gian Carlo Menotti's Amahl and the Nightly Visitors, Euridice in Glucks Orfeus and Eurydike and La Musica in Monteverdi's L'Orfeo. She also wrote the title role in Hans-Ola Ericsson's opera based on Höga Visan, performed by Piteå Kammaropera in 2004. In May 2005, she performed Meleagro in Handel's Atalanta in Göttingen and in June 2006 Titania in Purcell's Fairy Queen in Hanover.

Susanne Rydén has written the musical drama Christinas resa with recitation, dance and song, for which she received the Alf Henrikson scholarship in 2005.

She has been president of the Royal Academy of Music since 2015 and the CEO of Musik i Syd since 2018.
Sites:
susanneryden.com, bach-cantatas.com, Wikipedia
In Groups:
Bach Collegium Japan, Cantus Cölln, Schütz-Akademie, Stockholm Bach Choir, The Bach Ensemble, Weser-Renaissance
Variations:
Viewing All | Susanne Rydén
Rydén, S. Rydén, Susanne Ryden, Suzanne Ryden