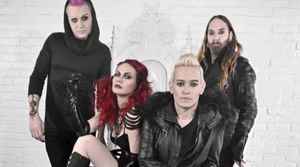 They signed to Roadrunner Records in 1995 after being recommended by Dino Cazares of Fear Factory, and received widespread exposure in the metal press as that label's hottest new property since Machine Head. Their debut attained further strong reviews.
Their sophomore set, 1999's Chamber Music, was boosted by the inclusion of their highly popular cover version of Peter Gabriel's "Shock The Monkey", featuring Ozzy Osbourne on vocals. Foss, who gave birth to her daughter by Morgan Rose of Sevendust the same year, was temporarily replaced by Nadja Peulen. The arrangement became permanent in 2002. The band was further unsettled when Cox departed the same September. Coal Chamber split in 2003.