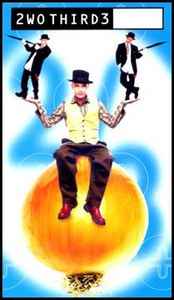 Profile:
For a brief moment in the mid-90s, 2wo Third3 were the greatest band in the world. The four-piece trio (Biff, their cartoon character songwriter, went on to write most of the Spice Girls' number ones) only released four singles - an album was recorded by never issued - but they represent a perfect pocket of super-stylised pop. As well as Lee, Danny, Victor and Biff, 2wo Third3 were also the work of manager Tom Watkins (Pet Shop Boys, East 17, Bros) and London design firm Form (responsible for most decent record sleeves since 1991). They were also the first sort-of-openly gay pop band.
After band split-up:
Lee disappeared for a few years and then re-emerged as 4th Child
Dan went into music publishing and licensing.
Victor went back to plumbing.
Biff went on to bigger, better things in the world of music production.
Members:
Lee Thomas (2), Richard Stannard
Variations:
Viewing All | 2wo Third3
2 Two Third 3, 2 Wo Third 3, Two Thirds

December 12, 2020
Having a liked all the singles I finally managed to find a copy of the unreleased album online (after a little bit of digging). Such a shame that it never had a proper release as it is really excellent. The singles are not the only high points - there are other tracks that would have made great singles such as the superbly catchy 'A Change of Heart'. Only the track 'Prince Albert' outstays its welcome. A track that is essentially the lead singer talking about his own merits. Maybe its meant to be ironic but at over six minutes enough is enough.
If you like well-written, catchy synth-pop (think very early Depeche Mode) then this is worth trying to track down.
Reply  See 2 replies Notify me 1 Helpful