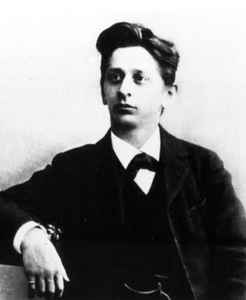 Zemlinsky studied piano at a young age and played the organ at synagogue. In 1884, at age 13, he was admitted to the Vienna Conservatory where he studied piano, theory, and composition until 1892 under Anton Door, Robert Fuchs, Johann Nepomuk Fuchs, and Anton Bruckner.

In 1895, Zemlinsky founded the amateur orchestra Polyhymnia, in which Arnold Schoenberg played the cello. Both became life-long friends, and Schoenberg married Zemlinsky's sister.

As a composer, Zemlinsky was influenced by Johannes Brahms, who supported him and recommended his work to music publishers. His first great success came in 1897 with the performance of his "Symphony Nr. 2." In 1900, Gustav Mahler conducted the premiere of his opera "Es war einmal" (Once Upon a Time) at the Viennese Hofoper.

In 1906, Zemlinsky became First Conductor at the Viennese Volksoper; in 1907-1908, he conducted at the Hofoper. This was followed by a longer stint at the Deutsches Landestheater in Prague, where he conducted between 1911 and 1927. In 1924, he premiered Schoenberg's "Erwartung" there. Zemlinsky then moved to Berlin to conduct at the Kroll Opera. The rise of the Nazis forced him to return to Austria in 1933 where he focused on composing and only occasionally worked as a guest conductor. In 1938, he and his wife fled via Prague to New York City. In contrast to his friend Schoenberg, however, Zemlinsky failed to catch on in the United States. After a series of strokes that made it impossible for him to continue composing, he died of pneumonia in 1942.