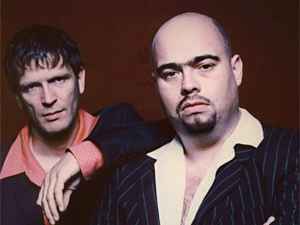 So there is absolutely no question about Storm - Storm being their biggest hit (26 releases, 1 even from last year) but one could argue Time to burn is better known. Perhaps it's because at the time it was released Electronic Dance Music was becoming more accessible (in Europe at least) so a lot more tracks that would have only hit the clubs 2 years earlier were now also getting into the pop charts. Which is a shame, Time to burn doesn't even come close to the genius that is Storm. Most 'oldskool' club visitors probably know the track through and through and it's definitely a classic which layed down a ground for the existence of a harder and clubbier kind of Trance, not entirely Hardtrance, not really Hardhouse, but somewhere in between while still holding a tight grip on the more classical basics of a trance/(soft)techno track. It's uplifting, yet dark and minimalistic, it's energetic, yet has a very slow build-up, it's like Jam & Spoon but dark, hard and tight, and it feels really great.

Enough about the main attraction, they did other tracks as well. As mentioned above, Time to burn is pretty well known, but cheaper than Storm. Huri-Khan is a lesser known track, but if you liked Storm, it's worth checking out, it's harder and darker but still very good. I would also like to mention Love is here to stay, which has a more 90s house feel to it, without losing the darker and more uplifting edge Storm represents. Personally I like 'Chaser' a lot as well, it's a very unique mix between tribal(y) techno, house and hardtrance. Then there were the not so great hit-and-misses, namely Stormanimal and We love, which probably ended the Storm franchise.

Perhaps the style wasn't fit for more tracks, perhaps it was all just an experiment, I don't know. I however do know that some of the tracks that were produced under Storm helped shape clubmusic and gave trance fans everywhere a whole new experience to enjoy. So they only had a 2-year run, they will remain in our hearts forever.

If you've never heard of these guys or their Storm alias, check it out, any EDM enthusiast will love it. If you have, you know I'm right.
Reply  See 1 reply Notify me 8 Helpful