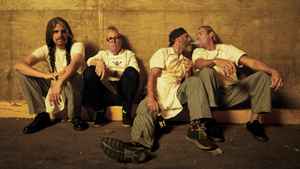 Profile:
Tool is an American rock band from Los Angeles, California, USA, formed in 1990. They emerged with a heavy metal sound on their first studio album, Undertow (1993), and later became a dominant act in the alternative metal movement, with the release of their second album, Ænima in 1996. Their efforts to unify musical experimentation, visual arts, and a message of personal evolution continued with Lateralus (2001), 10,000 Days (2006) and the most recent album, Fear Inoculum (2019).

August 6, 2022
Finally it has arrived... Oh yeah! Fear Inoculum on vinyl as a official release. Remember this ; Good tools is half the job...\m/

February 20, 2022
Fear Inoculum has been hesitantly announced for vinyl release sometime in April. A signed Deluxe limited edition test pressing package has been made available to VIP pass holders and maybe concertgoers for a price of $810. Christ.
See 1 reply

August 9, 2021
Alright, it has now been 4 years since they claimed that they had started working on vinyl reissues of their studio discography, when are we actually gonna start to see any of that? Love the guys, but the fact that we haven't seen any official vinyl issues of their studio albums since the mid-2000s is just ridiculous for a band like them. No wonder bootleggers love their discography so much.

May 2, 2021
Tool, if you are still remastering and re-releasing your back catalog, Please, no more PICTURE DISCS.
See 1 reply

March 12, 2021
Come on Tool; do the right thing...... Please do an OFFICIAL high quality release of all the albums on vinyl.

September 14, 2020
i would love to see what mobile fidelity could do with tool's albums if they could get their hands on them for official releases.
See 2 replies

September 3, 2020
I love Tool, but it seems like nearly all their official vinyl pressings suck.
See 1 reply

April 20, 2020
possibility of a new EP this years, not extra details about it
See 2 replies

When is Tool ever going to officially release their discography to vinyl? So far only Opiate, Undertow, Ænima, and Lateralus are on vinyl, but one is a picture disc, and another is hard to find even when you see one the prices are insane