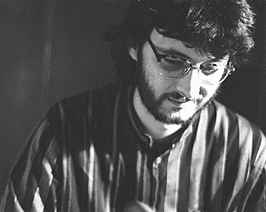 During the mid-80s while in Trinity College, Dublin, he arranged music for and played on many recording sessions, including jingles for the Bank of Ireland, a TV documentary score and singles for local rock bands. He has also composed and performed for theatrical productions including a version of Joyce's Nighttown scene from Ulysses at the Project theatre, Dublin.

He has guested on albums by highly established Irish songwriters like Luka Bloom and Mick Hanley. He joined post-punk band the Real Wild West in the late 80s and gigged frequently with them for three years, including playing the Eurorock Festival '87 in Frankfurt, the Mean Fiddler in London and supporting Echo and the Bunnymen and the Pogues in Ireland. The Real Wild West single was produced by Pogues Shane MacGowan and Philip Chevron; the album was produced by John Langford of The Mekons.

Ian Smith appeared at the Cork International Jazz Festival in 1988 and 1989, playing a set with saxophonist Richie Cole in '89. He has been involved in duo and trio gigs with guitarist Louis Stewart. He moved over to London in 1990 and in May '91 co-founded the group Forest which quickly became established on the London freeform scene. He was a sometime member of the Screech Owls, a rock band which featured former Virgin Prune Dik Evans, which performed at the Mean Fiddler.

Since 1992 he has been playing improvised music and has performed with Evan Parker, John Stevens, Maggie Nicols, Lol Coxhill, Steve Beresford and Eddie Prévost among others. His own trio, Trian, has played at the 1993 London Experimental Music Festival and the 1992 Soho Jazz Festival. He also participated in a reformation of Cornelius Cardew's Scratch Orchestra in the ICA in 1994. He has collaborated with composer Roger Doyle, winner of the Bourges International Elecro-Acoustic Music Competition 1997, and he has been featured on two instrumental tracks by the hip hop band Marxman. He toured the UK with Butch Morris' London Skyscraper conduction project in November 1997.
Sites:
efi.group.shef.ac.uk
In Groups:
London Improvisers Orchestra, Roland Ramanan Tentet, The Bill Wells Big Band, The Buck Clayton Legacy Band, Unlaunched Orchestra, Watt (6)
Variations:
Viewing All | Ian Smith (5)
Ian, Smith