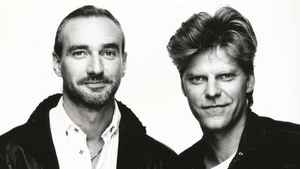 Profile:
Danish electronic music duo group from Copenhagen, formed in 1979.
As Laid Back, Copenhagen, Denmark-based duo Tim Stahl and John Guldberg are known most for a handful of stylistically disparate hits that spanned the 1980s.

The duo had met the previous decade with the Starbox Band, discovered that they worked well together, and within a short period of time landed a contract as Laid Back on Teldec subsidiary Ultraphone. Their first single, “Maybe I’m Crazy,” was released in 1980, preceding their self-titled debut album released the following year.

Two years later, they signed with the Medley label and scored a hit in their homeland and abroad with the descriptively titled “Sunshine Reggae,” released in support of their second album, Keep Smiling.
The single was unsuccessful in the U.S., but its B-side, a snapping electro-funk number titled “White Horse,” was embraced by several of the country’s club DJs.
Licensed in the States by Sire, the track topped the Billboard club chart and went on to be referenced many times, most significantly on Monifah’s 1998 hit “Touch It”.

After Play It Straight and See You in the Lobby, Stahl and Guldberg had additional success with the Ariola label, where they added to their pile of hits with “Bakerman”.
The Ariola deal produced the albums Hole in the Sky and Why Is Everybody in Such a Hurry!, as well as the career-spanning retrospective Laidest Greatest.

Although Laid Back released only Unfinished Symphonies and Happy Dreamer during the next several years, the duo also worked as film music composers, and were awarded a Robert, the Danish equivalent of an Oscar, for their work on Flyvende Farmor.

In the early 2010s, they were as active as ever with self-released albums including Cosmic Vibes, Cosyland and the multi-volume Uptimistic Music.

October 25, 2021
you guys are awesome. Just rediscovering some of the early works.
A Greatest hits on vinyl would be much appreciated.