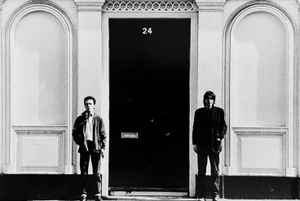 Profile:
The musicians behind Dome: Bruce Gilbert and Graham Lewis, originate from the seminal and influential new-wave band Wire, often acclaimed as pioneers of a music that took "punk" to more "intellectual" realms. Dome was their project for exclusively exploring such experimental music. During their original incarnation they recorded 4 albums, and also releases under other guises on 4AD (both under their own names and as Cupol) and on Mute with Daniel Miller as Duet Emmo. They also issued a further album as Dome later.
Sites:
Wikipedia
Aliases:
Cupol
Members:
Bruce Gilbert, Graham Lewis

August 8, 2022
Incredibly self-indulgent but just as rewarding a listen, not on the first one though. It takes time. "1+2" and "3+4" compilations on The Grey Area/Mute plus "8 Time" compilation on 4AD are essential. Get them.