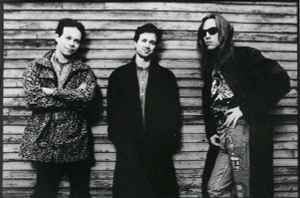 Profile:
Violent Femmes were founded in 1980 by bassist/multi-instrumentalist Brian Ritchie and drummer Victor De Lorenzo. The name is a contradiction in terms, “Violent” being self-explanatory and “Femmes” being Milwaukee slang for wimp.
The rhythm section added high school singer/songwriter Gordon Gano in 1981. Gano and Ritchie had previously performed together at Gano’s National Honor Society induction ceremony, where they caused a near riot. Gano was expelled from the Society and suspended from high school for this outrage.
One of the only stable aspects of the band is their aversion to rehearsal. Due to this they would take the music to the streets in an attempt to hone it and earn some spare change. It was on one of these occasions that they were spotted by the Pretenders. Chrissie Hynde and the gang were so amused by the Violent Femmes antics that they invited the band to open the show for them. The hometown Milwaukee audience received the Femmes with unanimous booing. However by the end of the set the Femmes had converted approximately 50% of the audience to their cause. Many years later Brian Ritchie encountered Hynde when the Femmes and Pretenders shared the bill at a radio concert. She said, “Oh, you’re still around.”
The Femmes borrowed $10,000 from Victor De Lorenzo’s dad to record their legendary first album in 1982. Slash Records in Los Angeles was the only label to offer them a deal with the amazing advance of $0. The band accepted the deal and started on the predictable round of world tours, recording, more world tours, nervous breakdowns, band members quitting, solo albums, regrouping, more touring, divorces, more crackups, dropped from record deals, new deals, more touring, record company going bankrupt, lawsuits, etc. etc. etc. ad infinitum.
Fast forward to the present. Many things have changed. One thing that hasn’t is the sound of the band. Their loose, improvisational, acoustic sound is timeless.
Sites:
vfemmes.com, Facebook, Violent-Femmes.Com, Wikipedia
Members:
Brian Ritchie, Brian Viglione, Darren Brown, Darren Brown (4), Gordon Gano, Guy Hoffman, Jeff Hamilton (2), John Sparrow (2), Steven Mackay, Victor DeLorenzo
Variations:
Viewing All | Violent Femmes
The Femmes, The Violent Femmes, VF