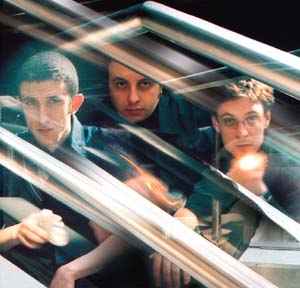 Profile:
House / Electro trio from France, made up of Dirty Ali & Funky Farid and Monsieur Club
Three DJ producers, Dirty Ali, Funky Farid and Monsieur Club, based in the South of France, have come together to form a group called The Eternals.
Astropioneers is their first album. Composed like an original retro -futuristic motion picture soundtrack, this album recounts the adventure of three " Astropioneers " on a quest for the interstellar Grail, in a musical universe that was partly inspired by John Carpenter. Some of the songs are dance-floor house and electro-techno hits (Astropioneers, Andromeda Gate, Rebel's Revenge...), whereas the others songs cover the more somber part of the story and are less rhythmical, with more intricate harmonies and keyboard arrangements (Time Bomb, Zero gravity...). Finally, thanks to their collaboration with Benjamin Diamond, they found the alchemy necessary for the closing credits of this imaginary film, with the song " Strange World ".
This album may be a new approach to electronic music, increasingly spiritual and uncanny, yet hedonistic, and written to be played from beginning to end without interruption and listened to like a story.
Sites:
Facebook, SoundCloud, MySpace, astropioneers.free.fr
Members:
Ali Allalou, Farid Allalou, Henning Specht
Variations:
Viewing All | The Eternals
The Eternals (Dirty Ali, Funky Farid & Monsieur Club), theeternals