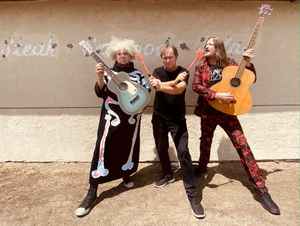 Profile:
(the) Melvins are a prolific rock/metal band originally formed in 1983 in Aberdeen, WA, relocating to San Francisco, CA in 1988, and eventually settling in Los Angeles' San Fernando Valley. The core members are Roger "Buzz" Osborne aka King Buzzo (guitar/lead vocals) and Dale Crover (drums/vocals and bass on some releases). Throughout their 30+ years career they have had a rotating cast of more than 10 bass players and have released more than 20 studio albums. Their current bassist is Steven McDonald. They perform under the name "Melvins Lite" with Trevor Dunn on stand-up bass and under the name "Melvins 1983" with Dale on bass instead of drums, in reference to the early incarnation of the band circa 1983 before Dale played the drums in the band. The name Melvins came from a grocery clerk at the Thriftway in Montesano where King Buzzo served as clerk and vandal. Melvin was the most hated fellow employee and they felt it to be an appropriately ridiculous name.

August 15, 2021
Much of the Alternative Rock movement and the variations of the Metal genre that started in the 1990's can be sourced back to what Buzz, Dale, and whoever was on bass that month were doing. Starting off playing as a practical Heavy Metal version Black Flag to slowing things down to slugs pace to being almost Pop Metal nowadays and every once in a while just making weird noises for the hell of it. They were never going to make platinum records and sell out arenas around the world but frankly I wouldn't them to be like that. And something tells me neither would they want to be that way either. They go at their own pace, make the records they want to, enjoy the work they make, and have a dedicated cult fanbase that will always be there for them. Plus with all those limited releases you'll be busy for a while trying to complete their discography.
Reply  See 4 replies Notify me 5 Helpful