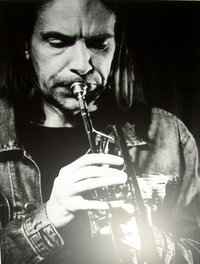 Real Name:
Heyme Langbroek
Profile:
Picked up a trumpet in 1978, followed by a guitar in 1984 (which he painted pink), a tenor sax in 1992. Never really forgave his parents for getting rid of the piano in the living room before being deemed old enough to play it.
Was jamming with Rudy Trouvé in the Heaven Hotel cellar from 1992. Sometimes came out of there to do some live improvised gigs which turned into Kiss My Jazz. Released a bunch of cassettes, cds and a 7" vinyl with these, and joined Lionell Horrowitz & His Combo in time for the movie-tour with Dave's Great Idea, and being released on "Au Bain Marie", Quotes: “quite a nice CD which I still actually play”. After finished with Kiss My Jazz went back to the improvisational roots playing with IH8 Camera, a 100% improvising band with fluctuating members on stage. Craig Ward recorded the sessions, mixed some good bits, and turned them into CD's to release.
Ended up in IT for some reason, never stopped playing though. Now gathered a bunch of attic recordings over the years, and released these on Noise From The Attic, his first solo CD.
Sites:
Bandcamp, SoundCloud
In Groups:
i-H8 Camera, Kiss My Jazz, Lionell Horrowitz And His Combo
Variations:
Viewing All | Heyme Langbroek
Hemye Langbroek, Heyme