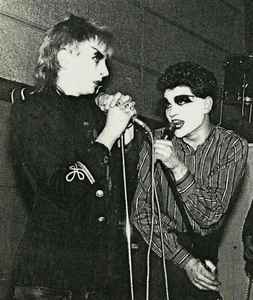 Profile:
Formed in mid-1977 in Dublin, for a time the Virgin Prunes were "the most overtly subversive rock group ever to come out of the genre" (Mark Prendergast, "Irish Rock"). Their reputation was built on their outrageous stage performances and supported by a wayward and individual collection of record releases.

Singers Gavin Friday and Guggi, along with third vocalist Dave-iD Busaras, guitarist Dik Evans, bassist Strongman and drummer Pod, released their first single in 1980. Pod soon left to be replaced by Haa-Lacka Binttii, who left around a year later, to be replaced in turn by Mary D'Nellon.

In 1984, both Guggi and Dik left the band and the music business. Mary D'Nellon took over guitar duties and Pod returned as the band's drummer. The Virgin Prunes started to record the album Sons Find Devils, which was not released before 1998 as a CD release on Cleopatra label and on vinyl not until 2003 on italian Get Back label.

1985 saw the release of a retrospective video (confusingly titled Sons Find Devils, despite having no connection with the still unreleased album) and a compilation album of rarities (Over the Rainbow).

The band toured as a four-piece and finally released a new album, The Moon Looked Down and Laughed, in the summer of 1986. Gavin Friday left the group in November 1986 to pursue a solo career, effectively ending the group. This was formally confirmed by a short comment at the bottom of the sleeve of a live album, The Hidden Lie, released in 1987. D'Nellon, Strongman and Busaras went on to record and perform as The Prunes (2).
Sites:
virginprunes.com, Facebook, Wikipedia
Members:
Daniel Figgis, David Kelly (9), David Watson Jr., Derek Rowen, Fionán Hanvey, Pod (6), Richard Evans (5), Strongman, Trevor Rowen
Variations:
Viewing All | Virgin Prunes
The Virgin Prunes