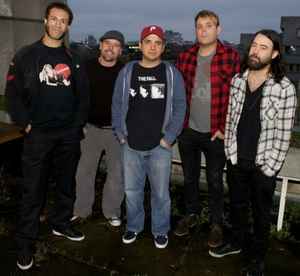 Profile:
Rock/Hip-hop group from Pennsylvania, US.
Formed 1988 and on hiatus since 2015.

Their highly controversial recordings feature broadly satirical lyrics. The group formed as a small alternative band called Bang "Chamber 8". It consisted of Jimmy Pop and Daddy Long Legs. They released an eponymous tape in 1990 before changing their name to, Bloodhound Gang in 1991. This name is a reference to "The Bloodhound Gang", a segment on the 1980s PBS kids' show "3-2-1 Contact".

March 23, 2022
I miss the BHG, wish they would make a comeback & bless us with new music (not similar to their last album though, please)
Reply Notify me Helpful

November 15, 2017
Anybody out there know anything about the song “The Choice Is Yours” by BHG? Like, where to find it...
Reply  See 3 replies Notify me Helpful