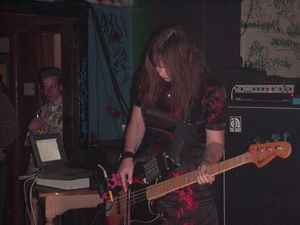 Profile:
Cat Hope is a solo noise artist with a difference: she uses a bass guitar. Based in Perth, where she performs regularly in her noise outfit Lux Mammoth and band Gata Negra, Cat also composes on commission for contemporary dance, theatre and film. Her works have been toured extensivley, and the inclusion of one of her compositions on the Susan Lawly "Extreme Music From Women" compilation early in 2000 led her to develop her solo bass noise performances and subsequently tour the USA, UK and Australia. Cat has also performed as a noise artist with Ikue Mori, Stellarc, Jon Rose and Tony Buck, and has completed albums with her band Gata Negra, Lux Mammoth, as well as Micevice and Hugo Race and The True Spirit. Recordings of her works have been released internationally, and her solo bass album "Fetish" has recently been re-released in Australia and the USA. Her music is languid and distorted, personal and disquieting, featuring endless bass loops, feedback, static noise and generally a bass guitar used in ways you would never imagine possible.
Sites:
cathope.com, Bandcamp, SoundCloud, MySpace
In Groups:
Abe Sada (3), Decibel (14), Gata Negra, Lux Mammoth
Variations:
Viewing All | Cat Hope
Cat