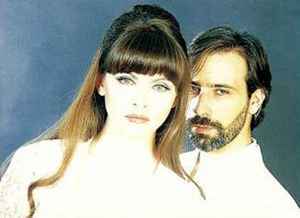 Alessandra is a popular star in TV music and variety shows like Gran Premio, Luna di Miele and Bellezze al Bagno, and sings with top bands.
Fabio had his first album in 1987 with the band Vox Populi.

In 1997, Jalisse won the Sanremo Music Festival with Fiumi di parole (Rivers Of Words) and went on to represent Italy at the Eurovision Song Contest 1997, where they reached a very respectable 4th place with 114 points. (The failure of the admittedly strong entry was used as one of the reasons for Italy withdrawing from subsequent Contests, 1998-2010.) Jalisse applied to represent San Marino at the Eurovision Song Contest 2008 but were not chosen.
The return of Jalisse
In 2001/2002, Alessandra debuted as an actress in the musical "Emotions" under the direction of Sergio Japino. Her husband, meanwhile, decided to leave the singing entirely to her and dedicate himself to their small label,Tregatti productions and printed music.
In 2004, she released the single 6 Desiderio that was innovatively promoted: it became the soundtrack of a Roman Taxicompany that inserted their voices and the bridge of the song in the call-center in addition to a one month promotion in 70 vehicles. Poet and friend Norman Zoia came up with the statement "A taxi called desire" which contributed to the naming of the "Taxi Music dei Jalisse" enterprise.
In the spring of 2005, the album "Siedi e ascolta" (Sit and Listen), along with the Siebenpunkt.com's release of "Edel," was released in Germany, Switzerland, and Austria. It contained two unedited songs, and a few completely revised songs from the previous album including a Spanish version of "Fiumi di parole", titled "Rios de palabras", which was dedicated to her South American fans. In Sweden, they win 3rd place in an international competition, the "Baltic Song Contest" in Karlshamn.
Their performances around Italy (Localitour of Italy) also became an occasion to promote cultural tourism for places where the performances took place, like the Region Lazio in 2004 and 2005.
February 1, 2006, they presented at the Farnesina (MFA), in the presence of Minister Gianfranco Fini. They presented their new 'Faith in love (Peter loves Halima) for peace in the world with respect to religion and personal belief. The lyrics were the work of the Italian ancestry Iraqi writer Younis Tawfik, a member of the there Islamic in Italy. The message was posted to embassies worldwide by Carlo Azeglio Ciampi, the President of the Italian Republic, to the highest Italian authorities and Pope Benedict XVI. On March 28th 2006 they were received by Rabbi Chief Riccardo Di Segni of Jewish Community of Rome .
The Art is Life is their show, set up together with other artists from Province of Treviso. It aims to show an alternative way of doing television, launching peace and social messages, and recalling the fundamental values of the family as the basis of life.
The 2006 tour group (Localitour d'Italia 2006) started from Oderzo May 26. In autumn the tour was interrupted due to the singer's second pregnancy.
In September 2011, Jalisse playing at the international exhibition "Human Rights Tour 50°" for the 50th anniversary of Amnesty International in Monselice (PD). On stage with them, also plays the guitar player and singer Carlo Zannetti, Poetasternote in art. Jalisse & Carlo Zannetti played together in several concerts throughout 2011.
Sites:
jalisse.it, Wikipedia, Wikipedia
Members:
Alessandra Drusian, Fabio Ricci (4)