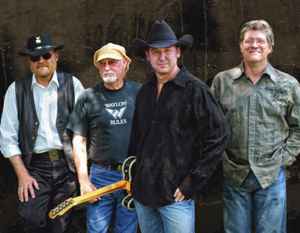 Profile:
The Waylors were the backing and recording band of country music singer Waylon Jennings. Jennings formed the band in 1961, consisting of Jerry Gropp on the guitar and Richie Albright on the drums after moving to Phoenix, Arizona. The band earned a local fan base during its appearances on the night club JD's.
In 1965 RCA Records signed Jennings to a contract. The conservative restrictions of the producers of the label did not allow him to record with The Waylors. In 1972 he renegotiated his contract, and he included The Waylors for the first time on a RCA album in Waylon Jennings - Honky Tonk Heroes. The lineup was expanded during the next decade and they backed Jennings until his death in 2002. At various time the members have included Richie Albright, Bee Spears, Don Brooks, Jerry Gropp, Larry Whitmore, Ralph Mooney, Rance Wasson, and others.
Sites:
Wikipedia, waymoresoutlaws.com, imdb.com
Members:
Bee Spears, Don Brooks, Jerry Gropp, Paul Foster (5), Richie Albright
Variations:
Viewing All | The Waylors
The Waymores Outlaws, Waymore's Outlaws