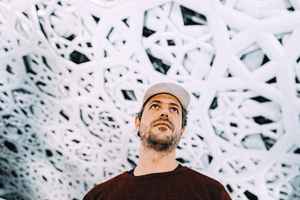 Profile:
Few electronic artists have the audacity of Romain De La Haye, aka Molécule. Producer, DJ, adventurer - Molécule is an explorer - literally as well as figuratively - who feeds his imagination by confronting extreme experiences in various territories, each time extracting a unique sound and visual palette. The result is powerful, deep techno that truly comes to life during his fascinating and moving live performances.

'60°43' Nord’ : The project that earned him the name of "pioneer of nomadic electronic music". In 2013, Molécule boards an industrial trawler with his home studio, intending to record and compose as close as possible to the storm. The resulting album: “60°43'Nord” – written in 34 days, in situ, on the border of Iceland and Scotland, in the extreme weather conditions of the North Atlantic Ocean.
http://hyperurl.co/e6s3nx

'-22.7°C' : In the winter of 2017, Molécule returns to Greenland. He spends 5 weeks in a small Arctic village, totally isolated,  in the company of local hunters only. Taking the recordings of sounds and silences captured on the ice cape, he composes the entire album ‘-22.7°C’. An album that is witness to the beauty and fragility of nature in this polar environment.
http://smarturl.it/Molecule-22

'NAZARE’  : A meeting of electronic music and big wave surfing. In February 2019, musician MOLÉCULE joined forces with the elite of big wave surfers to take on his greatest challenge, to compose an album in the heart of one of the most dangerous waves on the planet, the infamous Nazaré in Portugal. His NAZARÉ EP was born out of this extraordinary experience and will be released on January 17, 2020 on Ed Banger records. Music created from the sound of the ocean, where grace and chaos become one, from the calls of surfers, and relaying the intense emotion that the musician would feel in front of this 20m wall of water. Surfing, like it has never been heard before!
https://lnk.to/MoleculeNazare

‘MUSIC FOR CONTAINMENT’: On the initiative of the musician Molécule, 33 artists are joining forces to offer 33 titles that mark an unexpected era, with the certainty: sound is a fantastic means of exploring space and raising awareness. All profits will be donated directly to the Fondation de France for "Restons solidaires face au virus".

’TEVENNEC’: A new dream come true ... Helicoptered in May 2021 for an exceptional residence on the haunted Lighthouse of Tévennec, Molécule signs a new mystical project straight out of the shadows. Faithful to his artistic dogma, the artist has entirely composed this album located in Tévennec's lair, at the gates of hell. An Electronic and Ambient sound manifesto, stuffed with soundfield recordings: a rift towards the beyond.
Release February 2022: LISTEN & PROMO PACK

Currently, Molécule is co-directing a film on the Vendée Globe 2020 with skipper Thomas Rettant. He also works on his first “studio” album. Release December 2022.