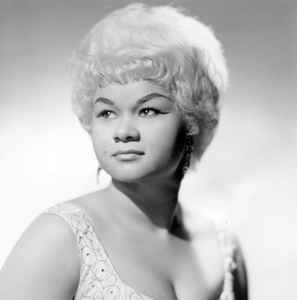 Etta James was discovered as a teenager by Johnny Otis, with her first hit in 1955. She recorded for Modern Records (2) and Kent Records for the remainder of the 1950's. She signed with Chess in 1960, recording with them until 1976. From 1965 to the mid 1970's she battled heroin addiction.

In 1978 she recorded the Jerry Wexler produced "Deep in the Night", which was her final recording until 1988, returning to the Muscle Shoals Sound Studios to record "Seven Years Itch". From 1988 through 2006, she recorded frequent albums.

She was inducted into the Rock And Roll Hall of Fame in 1993. In 2008, the movie "Cadillac Records" told the story of her career through to the late 1970's, with her role being played by Beyoncé Knowles, who also recorded some of James' songs for the soundtrack.

July 31, 2021
I'm beginning to think Etta was one of those performers that couldn't make a bad record. She somehow was always surrounded by great musicians and great producers. Of course her own talent and strong will were essential. Not many reach the level of continued success that she did. An amazing performer, I am still filling in many gaps in knowing her work but so far no bad notes...

Just paying my respects to Etta. Vocally she was like a cross between Janis Joplin and Marva Whitney. But she had a more broad vocal range.
Though i have discovered little of the music that Etta has done at this time, i did (and still do) bang "In the basement" when i play out amongst others. But i am careful to play most of her rawest tracks. She had a voice that could cut an anvil in half.
As of now, maybe i will mostly remember her for her porcelain doll looks with her satin white hair (more Marva Whitney similarities again)
It´s strange too to think that the man who discovered Etta, Johnny Otis, died just 3 days before her.
Rest in Peace Etta.

Rest... In... Peace... by crimsonmetal74
Favorite Artists by soulchap
Artists - I have seen perform by pixel0ate
Singers Contributing to My Vinyl Craze by d-of
Watchlist by rockandroel
songers/artists/singers/vocalists by flipget26
Concerts I've Seen by drekxi
CDthèque by Atomago
Fave artists by misspanser
Artists for the Future by Milesbeet-hoven1
Seen Live..... by MO-Music13
“VH1’s Top 100 Women Of Rock ‘n’ Roll” by crimsonmetal74
Discogs to listen to by tearsdry
AMAZING MUSIC & OLD STUFF NEWLY DISCOVERED by kleez.one
The Rock'N'Roll Hall Of Fame by stassen
Artists I Collect by f.dum
Bands i was 'Lucky' Enough To 'See'!! by Andy_Rampage
True LP Artist Collection by mrboombap
Favorite Artists by pappattis13
View More Lists →