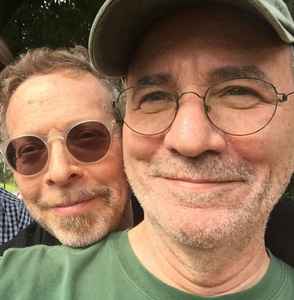 Real Name:
Douglas DiFranco and Steve Stein
Profile:
Double Dee (2) and Steinski was a duo of hip hop producers, composed of Doug "Double Dee" DiFranco and Steven "Steinski" Stein. They achieved notoriety in the early 1980s for a series of underground hip-hop sample-based collages known as the "Lessons".

Although they never had a hit record, they proved highly influential for subsequent artists such as Coldcut, DJ Shadow, Cut Chemist, The Avalanches and Girl Talk. Their music was not widely available on CD until 2008 due to their use of copyrighted material. There have been occasional illegal re-issues, and several internet sites have mp3s of their music available for download.

In 1983, Tommy Boy Records held a promotional contest, in which entrants were asked to remix the G.L.O.B.E. & Whiz Kid - Play That Beat Mr. D.J. single. By day, DiFranco worked in a professional music studio, while Stein was a copy supervisor for Doyle Dane Bernbach. Although the two were older (27 and 31, respectively) than most of their peers in the hip-hop community, they were both enthusiasts of the genre; Stein, in particular, had been attending downtown rap clubs for years and had an extensive knowledge of hip-hop's history (although early hip-hop records did not appear until 1979, DJing was a phenomenon that had been around since 1973. Stein claimed to draw inspiration from the Flying Saucer records of the 1950s (by Buchanan & Goodman).

Their contest entry, "Lesson 1 – The Payoff Mix", was packed with sampled appropriations from other records - not only from early hip-hop records and from funk and disco records that were popular with hip-hop DJs, but with short snippets of older songs by Little Richard and The Supremes, along with vocal samples from sources as diverse as instructional tap-dancing records and Humphrey Bogart films. The record was pieced together in DiFranco's studio in 12 or 14 hours over two days and was critically praised. The jury, which included Afrika Bambaataa, Shep Pettibone, and John "Jellybean" Benitez awarded "Lesson 1" the first prize.

DiFranco and Stein followed up this success with the track "Lesson 2 - The James Brown Mix" in 1984, which began with a sample from The War of the Worlds before quickly running through a montage of memorable breaks from classic James Brown records, as well as various other samples. Also that year, DiFranco teamed up with David Witz, a CBS Records producer who recorded as Arthur Ether, to create "Taste So Good", which they released under the name File 13. "Taste So Good" was built from snippets of recorded sex-phone calls over an original instrumental bed.

In 1985, the track "Lesson 3 - The History of Hip-Hop Mix", attempted a survey of the great breakdancing favorites, along with snippets from The Tonight Show Starring Johnny Carson and Archie Bleyer's version of the song "Hernando's Hideaway". The track "We'll Be Right Back" was released in 1986 under the name Steinski & Mass Media ; as the title indicated, the track was dominated by samples from TV and radio adverts from the 1950s and 1960s. Later in 1985, Double Dee & Steinski - Lesson 1, 2 & 3, was released, containing all three "Lessons".

Although DiFranco currently pursues a career in sound design for television, Stein has remained active in the music genre in recent years, doing occasional remix work and longer old-school mixes, as well as DJ'ing regularly in Europe and the UK using a laptop and midi gear. The pair reunited in 1998 to remix Afrika Bambaataa's "Jazzy Sensation", in 2002 for a live performance at the Roseland Ballroom in New York opening for DJ Shadow, in May 2006 opening for Coldcut at Irving Plaza, in August 2007 opening for Negativland at the Highline Ballroom, and in January 2008 opening for DJ Shadow and Cut Chemist at Irving Plaza for 2 nights. Stein is interviewed in the 2001 documentary "Scratch".

In 2002, all three of the original "Lessons" were re-released on vinyl, as well as for the first time on CD on the Various - The Ultimate Lessons collection. This compilation also featured Cut Chemist's Lesson 4, as well as several live collaborations featuring DJ Shadow, Cut Chemist, Steinski himself, and Shortkut. Although it was widely available at the time shortly after its release it can be difficult to track down today; this is most likely a bootleg or unlicensed recording due to the dozens of uncleared samples. It is common practice for such releases to be printed in small numbers to avoid the unwanted legal attention of the copyright holders.
Sites:
ddski.com, Bandcamp, Twitter, instagram.com
Members:
Doug Di Franco, Steve Stein
Variations:
Viewing All | Double Dee & Steinski
D.D. & S., DDS, Double D & Steinski, Double D / Steinski, Double Dee + Steinski, Double Dee And Steinski, Double Dee And Steinsky

June 10, 2003
If anyone comes across a record with Lesson 4 by Double Dee and Steinski, they did not do it (confirmed in several recent interviews with Steinski). There is a record with their name falsely attached to Lesson 4, apparently the track is actually “Big Apple Noise” by Translux.