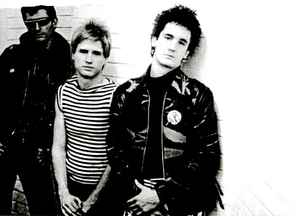 1977: Testors performs shows in N.Y.C. at CBGB's and Max's Kansas City with The Cramps, Dead Boys and others and a tours in the East Coast of the U.S. .
1979: U.S. tour with Dead Boys.
1980: Testors releases their only record, the 7" "Time Is Mine / Together" and disbanded the same year.
All the other stuff were released posthumously.

In 2004 Sonny Vincent showed at Chicago Blackout fest as Testors with members of Rocket From The Crypt.
In April 2011 Testors reunited with the original line-up: Sonny, Gene, Jeff and Ken for a show in New York City.

May be the best punk band of the 1970s. I don't give a fuck about Ramones or Sex Pistols or Clash. Johnny Thunders and the Heartbreakers and The Germs were really good as well. I always listen to The Testors and they're just so fucking cool and I really love them. Songs just really sound good and not dated. I find them really addictive and almost indescribable in how they make you feel good. Good punk rock is the best drug!