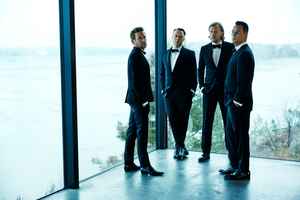 With eleven #1 albums, five #1 singles, 23 Swedish Grammy Awards, and over 3 million record sales, Kent is considered the most popular rock/pop group within Sweden and throughout Scandinavia.

With origins rooted in distorted rock, Kent found mainstream success through their alternative rock albums of the mid-1990s, 2000s and 2010s, the latter decades during which they adopted elements of synth-pop. On 16 March 2016, the band announced that they would release their final album, titled Då som nu för alltid, after 26 years of performing. The band's announcement noted that the dissolution of the band is voluntary and is despite their continued success.
On December 17, 2016, Kent made their last gig ever and the band ceased to exist

May 21, 2022
Kent vinyl albums are being repressed right now, i know because i bought a bunch of them this past week. Du and Jag Doden, Vapen & Ammunition, Isola, Hagnesta Hill, and others. As far as i know these are 2022 reissues, however i just received some of them this week from Sweden and they are still dated 2015 so i am not sure if these are just leftover stock or if they are actual 2022 pressings. Either way do NOT pay high prices on the older versions of these vinyl records. With Joakim Berg's solo stuff coming out, i think these Kent albums will be in stock on vinyl. BUY while you can!! and do NOT overpay on Discogs support the artists and buy from the stores for much cheaper.
See 2 replies

Why have some of the Taiwan releases w OBI been removed from Discogs?

January 2, 2021
Amazing band and a must for everyone that loves Swedish music.
A fair bit of warning. Some sellers are price gouging the later albums (CDs) with high prices for no reason, this is a big band ergo there’s not the same shortage of copies, I would understand the vinyls since there are not so many from my understanding-if you want to buy cheaper CDs there are cheaper ones sold by CDON and other retailers if you want a cheaper CD version.