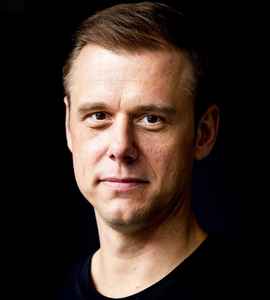 Real Name:
Armin Jozef Jacobus Daniël van Buuren
Profile:
Dutch record producer and DJ born 25 December 1976 in Leiden, South Holland.
Armin started producing and making House music at age 14, later he turned towards Trance. He is well known for his early releases like “Blue Fear”, “Touch Me” and “Communication” as well as his remixes for several other artists and groups.

December 31, 2022
Armin is a person who has ruined/killed (collapsed the market of trance as a style of electronics) trance (the real trance is Yahel - Voyage, for example) and who needs more and more money that he earns. Plus, it instills in young people a taste for crappy electronics, which is trouse, trance and house in 2003-2023. A man who simply destroyed the concept of "high-quality trance music" by releasing his boring ASOT show every week. I listened to ASOT, what can be the quality of the compositions that the so-called trance musicians write weekly, forgetting about what quality trance music is ((Bonzai, Eye Q, Le Petit Prince, Low Spirit, MFS, Noom, Platipus, Suck Me Plasma, Superstition, In Trance We Trust)) and thinking only about how to make more money on trance music. I knew one ardent fan of Armin (DJ Laugh). He lives with me in the same city. Fooling party-goers in my city by recording pre-mixed mixes in special programs and then he puts them on instead of real mixing. He never pays money for music, he downloads everything from the Internet. At parties, this so-called DJ dances to all tracks, he doesn't care what he plays, how he plays, who plays, he dances to everything. Thus, the portrait of Armin's admirer is as follows: this is a low-intellectual man. NOT having success with women, like the DJ I write about above. Who doesn't understand music. Who would like to be as popular as his beloved Armin. And who doesn't give a damn about music. How Armin himself doesn't give a damn about music. Armin, get out of the world of electronic music. DJ Laugh - your birth is the biggest mistake in life.
See 2 replies

September 2, 2020
99-05ish if Armin was playing, i would be there. His sets were outstanding. I would argue his Gatecrasher NEC 2002 set is his best. We used to all flock to Gatecrasher/Godskitchen/Cream if he was in the UK, and would always hit up his nights in Ibiza/Holland.

There is a lot of talk about him being shit after 2010ish. Probably true but then most of clubland and festivals aren't what they were in the 00s. If clubland went to shit, why not cash in and go commercial, it is a smart move. I thought there might be a new trance era when they all got touted as bringing the 90s sound back, but it didnt last long. Those lucky enough to have experienced 90s/00s trance will know that will never be replicated.
See 4 replies

November 21, 2018
Copy/paste of my comment about Tiesto. Simply replace the Name Tiesto with AvB:
"Haha, what is all this whining of his fanboys? And now ranting and cursing around about him because he...."changed".
Yes, I also liked tracks and mix-CDs. But when he changed, I didn't give a f...ish and moved on myself! There are so many good producers and DJs out there, I don't care if he changed or not.
All of you grumbling and accusing his "betrayal", get over the fact that your hero doesn't want to be your hero any more - or the hero for others :-D"

July 6, 2018
Arnin used to be a great trance DJ and producer but with his music that he's releasing over the last few years it keeps me asking what happened? It turned all in commercial, boring sh*t.
See 4 replies

January 6, 2017
Armin wins the award for the most overrated trance DJ ever.

March 23, 2015
Armin was one of the biggest legends in the world of the electronic music, but now he changed his style because he wants to appeal the new kids and the new sounds of electronic music. Since his first productions to 'Intense', his 5th album, he was doing good things (Yeah, I know that 'Mirage' or 'Imagine' are kinda poppy, but both are good albums). Then he started to incorporate a lot of Big Room Trance sounds to his productions and sounding more a more boring and commercial. But he's smart and he knows that his truly public is the trance family, so now he's working on his 6th album (he says that it will be a comeback to his roots), and at the same time he's working on his first album of GAIA with Benno de Goeij, and he released a new song of Rising Star. With the time we will see if he's coming back or it was something temporary.

July 6, 2014
And another so called DJ that has the urge to change its roots from good to bad music ( commercial ones that the mass like without even apreciate it anymore ! ) .

Yes Mr. Armin van Buuren as Dj Tiesto and Paul Oakenfold those so called DJ's who's nowadays ruins the nice great times of what real music was such as ( Techno, Rave, Trance, Acid, House, Drum&Bass ,...) . Nowadays we need to listen to cheesy boring music and that RnB over and over and as if it isn't enough we need to hurt our ears with sad music from those reality TV shows another commercialisation !

December 21, 2010
Armin now seems unable to make anything without Benno de Goeij (even his gaia project)... yeah that's right.
i think that this is the third year since the beginning of their collaborations. i actually liked Armin's productions before that.
i don't know what happened or for how long he will continue making tracks like that, but i don't like a producer to have someone write his music for him.
See 1 reply