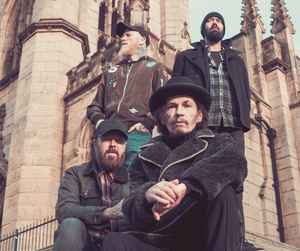 Highly successful during the late 90s. At their very peak in 1997 their original drummer, Andy Parle, left the band wanting to commit to a more "cultish" act. Leon Caffrey stepped into the stool as his replacement.

Mysteriously the band were shunned by a nervous record company who delayed their third album, and eventually shelved it completely. Tension grew and Jamie Murphy quit in 2001. Their fourth album was released in 2004 with hardly any attention from the world, and finally the band decided to call it a day in 2005 when Palmer walked out, vowing never to return.

In 2011 the band, minus Dave "Yorkie" Palmer, decided to reform with sights on recording a new album and a full UK tour. Jamie only played a handful of gigs during the initial reformation in 2011.

June 13, 2022
By far the most overlooked and misunderstood band ever to come out of the British Isles, the world, and quite possibly the whole universe! There is so much unbridled mischief and creativity in their music they make every other artist seem like a bunch of killjoys in comparison. If you do not agree with any of this, may I suggest you invest in some decent eardrums! Long live these Scouse nutters!
See 1 reply