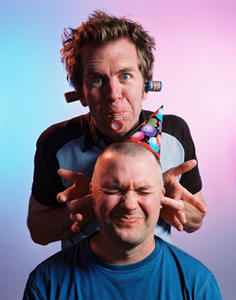 Profile:
Sonic Animation (stylised as sonicanimation) are an Australian dance, techno musical group; formed in Melbourne by Steve Bertschick as a DJ, Adrian Cartwright on drums, keyboards and programming with canadian born Rupert Keiller on lead vocals and programming in 1994. Their debut studio album, Silence Is Deafening, was issued on Azwan Transmissions in May 1997. All the tracks were written, produced and engineered by Sonic Animation using a 386 computer. Bertschik left the group in 1998 to "pursue his own musical interests.The band signed with a new label: Global Recordings / Festival / FIIDO. In January 1999 the group issued a single, "Love Lies Bleeding", which reached the ARIA Singles Chart top 50. Followed by"Didley Squat", did not chart.

"Theophilus Thistler" was released as a single in August 1999, which received high rotation on national radio station, Triple J, its popularity was assisted by the track's associated music video. The video featured their two mascots, or TechoTubbies, dubbed Robert Roley and Theophilus Thistler. At live performances the mascots' suits are worn by two fans selected by the band via their web site. "Theophilus Thistler" appeared on the ARIA Singles Chart top 100 and was listed at No. 18 on the Triple J Hottest 100, 1999. The group's second studio album, Orchid for the Afterworld, was issued on 11 October 1999 on Festival Mushroom Records, which peaked at No. 42 on the ARIA Albums Chart in April of the following year. It also reached No. 11 on the ARIA Dance Top 25 Albums chart. In 2005 the album was certified gold for shipment of 35,000 copies by ARIA.

Sonic Animation's third studio album, Reality by Deception, was released on 4 February 2002, which peaked at No. 22 on the ARIA Albums Chart and No. 6 on the ARIA Dance chart. It provided the singles, "E-Ville", "I'm a DJ" and "Super Showbiz Star" while "I'm a DJ" was listed at No. 74 on the Triple J Hottest 100, 2002. Defective Perspective was released on February 9 2004 and is the band's fourth studio album, which provided the singles, "This Is not a Love Poem" and "Get Up"

Sonic Animation announced their break-up in mid-2005 with the release of compilation album, Eleven (September 2005), which appeared on the ARIA Dance Albums Chart top 25. It was followed by the Bugger Off tour. They made their last festival appearance at the Big Day Out in 2006 (Australian shows only).

In 2011 Cartwright and Keiller revealed a new Sonic Animation remix for world music outfit, Delhi 2 Dublin. They announced that they were back in the studio recording their next album. In March 2013, after an almost six-year hiatus, sonic animation is releasing their fifth studio album, "Once More from the Bottom". The album provided the single, "I Will Be Twisted"; its music video was created with fan-submitted footage taken on cell phones at the 2012 Homebake festival.
Sites:
sonicanimation.com, Facebook, SoundCloud, SoundCloud
Aliases:
DJ RSK
Members:
Adrian Cartwright, Mark Saul, Richard Falkner, Rupert Keiller, Steve Bertschik
Variations:
Viewing All | Sonic Animation
DJ RSK, SONICanimation, SonicAnimation, Sonicanimation, sonicanimation