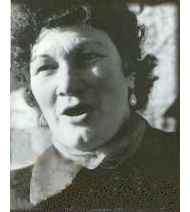 ". . . one of the elect -- one of the angels of folk song that have kept the tradition alive and burning across all time."
Alan Lomax

Many folklorists, from Alan Lomax to Peter Kennedy, have encountered Jeannie and searched for expressions to describe her stature as a folk-artist (she has been called “monumental”, “sweet and heroic” and “a glorious singer”).

Maybe Herschel Gower, the young ballad scholar from Tennessee, hit it off best when he said: “If only Francis James Child could have heard this!”
Hamish Henderson of the School of Scottish Studies, University of Edinburgh.
Sites:
Wikipedia
Variations:
Viewing All | Jeannie Robertson
Jean Robertson, Robertson