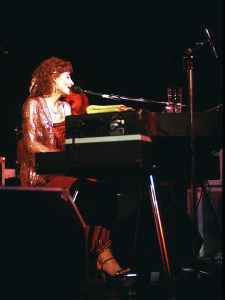 Real Name:
Sally Patricia Oldfield
Profile:
Born in Dublin, Ireland 3rd August 1947, Oldfield was raised in the Roman Catholic faith of her mother, Maureen. Spending her childhood in Reading, Berkshire, Oldfield studied ballet from the age of four and won numerous competitions in all styles of dance, including ballet, tap and modern. At the age of eleven, she won a scholarship to the Royal Academy of Dancing, then located in Holland Park, London, and two years later was starred to move on to the Royal Ballet School at White Lodge. However, she gave up ballet two years later, and achieved three A-Levels at Grade A. She studied classical piano to Grade 7. All her school years were spent at St Joseph's Convent School, Reading, where she became friends with Marianne Faithfull. Oldfield read English Literature and Philosophy at Bristol University.

Oldfield's musical career started in early 1968, when she made some demo recordings with her younger brother Mike Oldfield. These sessions were suggested and overseen by Mick Jagger. It is not known what became of those recordings.

Soon after this she founded the folk music duo The Sallyangie together with her brother Mike. The duo was signed to Transatlantic Records and recorded their only album at the recommendation of Pentangle band guitarist, John Renbourn, whom Oldfield met at the Troubadour Folk Club in Bristol. The album Children of the Sun was recorded in August 1968. The songs on it are mainly co-written by Sally and Mike Oldfield, and the album contained some of her brother's early guitar work. Guesting were Terry Cox on drums and Ray Warleigh on flute.