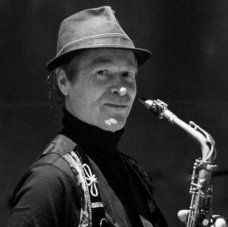 His family moved to Australia when he was 9 years old. He began his musical career as a R&B guitar player in the 1960's performing in several bands, including playing lead guitar for Doug Parkinson In Focus. He also wrote the music for the cult movie, Stone (1974). In 1975, he began transforming himself into a jazz alto saxophonist and composer. He led a number of original jazz funk, acid jazz, and free jazz bands in Austin, Texas, USA for 10 years. Since 2001, he has lived in Rockland County, New York, USA where he teaches, composes, and currently plays solo sax three nights a week (Thu, Fri & Sat from 10:00pm untll 1:00am) on the 86th floor Observatory Deck (outside) of the Empire State Building.
Sites:
MySpace
In Groups:
Doug Parkinson In Focus, Friends (25), The Questions (3)
Variations:
Viewing All | Billy Green
B. Green, B.Green, Bill Green, Green