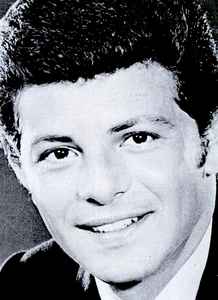 Real Name:
Francis Thomas Avallone
Profile:
American vocalist of Italian descent, successful in music, film and TV business of the 1950s and 1960s.
Born September 18, 1940, Philadelphia, PA., of Italian-Americans Mary Loretta and Nicholas J. Avallone.
In 1959 he scored two #1 hits on the Billboard Hot 100, “Venus” and “Why”. Because of his youth, he was one of the first to be classified as a “Teen Idol”. He had 31 charted U.S. Billboard singles from 1958 to late 1962, including “Just Ask Your Heart” (#7), “I’ll Wait For You” (#15), “Bobby Sox To Stockings” (#8), and “A Boy Without A Girl” (#10). Most of his hits were written and produced by Robert P. Marcucci, head of Chancellor Records. With other Teen Idols (including Paul Anka, Fabian (6), Ricky Nelson (2) and Bobby Rydell) he performed on TV music shows such as Dick Clark (2)’s “American Bandstand”, and on stage revues.
With Annette Funicello he starred in a number of “beach party” comedy films during the mid-1960s. Later he performed in other films in more romantic roles, as well as straight dramatic parts in the John Wayne historical western film “The Alamo”, or the 1961 science-fiction story “Voyage To The Bottom Of The Sea” with Barbara Eden. Avalon also often appeared as himself in nearly two dozens of TV episodes, including ABC’s “The Bing Crosby Show” and “The Patty Duke Show”. Later he became a national television spokesperson for Sonic Drive-In. In 1965 he appeared in the Combat! episode “Brother, Brother” as a childhood friend of Pfc. Kirby, played by Jack Hogan. In the 1978 film “Grease” he performed “Beauty School Dropout” as a character called Teen Angel.
Following an appearance on “American Bandstand” anniversary broadcast, Avalon, Fabian, and Bobby Rydell went on several long running tours of the US in the 1980s and 1990s, performing their old hits and medleys of other songs.
Married to Kathryn Diebel since January 19, 1963, they have 8 children and 10 grandchildren. Sons Frankie Jr. (drummer) and Tony (guitarist) play on tour with Avalon.
Sites:
Wikipedia, Wikipedia
In Groups:
The Avalons (13)
Variations:
Viewing All | Frankie Avalon
Avalon, F. Avalon, F.Avalon, Francis Avallone (Frankie Avalon), Franie Avalon, Frank Avalon, Franki Avalon, Frankie, Frankie Avalan, Franky Avalon, Франки Авалон, フランキー・アヴァロン