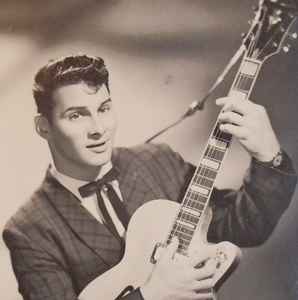 Real Name:
Edward Henry Reardon
Profile:
Born: March 6, 1927, Springfield, Massachusetts
Died: April 13, 1992, Los Angeles County, California
Born Edward Reardon in Springfield, Massachusetts, Fontaine signed as a vocalist with RCA in 1954 after serving in the US Navy. In 1955 he appeared at the Brooklyn Paramount Theater in disc jockey Alan Freed's first rock and roll show. He also sang in the Jayne Mansfield movie The Girl Can't Help It (1956). Musically he is best remembered for his 1958 single "Nothin' Shakin' (But the Leaves on the Trees)", which was later covered by The Beatles. He is listed as a "legend" but not an inductee at the Rockabilly Hall of Fame site. Fontaine moved to Van Nuys, California, in the 1960s after singing in night clubs in pre-Castro Cuba. He landed a role in the World War II series The Gallant Men, where he played ladies' man PFC Pete D'Angelo and occasionally sang. Although he never won another regular role in a television series Fontaine made many guest appearances on shows such as 77 Sunset Strip, Baretta, Happy Days, The Rockford Files and Quincy. In 1984 Fontaine was tried and convicted in a murder-for-hire case. According to police documents, in 1983 Fontaine approached a country singer with the promise of a recording contract with RCA, along with a large sum of money, if the man were to kill his estranged wife, with whom he was having a custody battle at the time. Fontaine served four years in a California prison. He had previously been convicted of child molestation and grand larceny. Fontaine appealed his murder-for-hire conviction based on the trial judge's rulings concerning these earlier offenses.
He made his last TV appearance in the series Sisters in 1991 and died of throat cancer the following year at age 65. His son Brian Reardon is a session guitarist in Los Angeles.
Sites:
rockabilly.nl, Wikipedia
Aliases:
Eddie Reardon
Variations:
Viewing All | Eddie Fontaine
E. Fontaine, Ed Fontaine, Eddie Fontane, Eddy Fontain, Eddy Fontaine, Fontaine, Fontana, Fontane