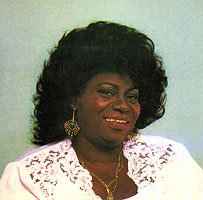 Real Name:
Jovelina Farias Belfort
Profile:
Jovelina Pérola Negra (Jovelina "Black Pearl") (Rio de Janeiro, July 21, 1944 - Rio de Janeiro, 2
November 1998) was a Brazilian singer.
One of the great ladies of samba and pagode. Hoarse voice, strong, crumpled in tone and strength popular stop. Heir of Clementina de Jesus style, was as her maid before making success in the art world.
Born in Botafogo (south zone of Rio de Janeiro), Jovelina soon planted his foot in the Baixada Fluminense, in Belford Roxo.
Appeared to the great public to participate in the historical record "Raça Brasileira" in 1985. Pastor of Imperio Serrano, helped establish what is today called the "pagode". Recorded individual earning a five-disc platinum. Currently there are found only the compilations with hits like "Feirinha da Pavuna", "Bagaço da Laranja" recorded with Zeca Pagodinho), "Luz do Repente", "No Mesmo Manto" e "Garota Zona Sul", among others.
The success came too late and she did not realize the dream of "earning lots of money and give to his children everything what she didn't have."
He died of a heart attack at age 54 in the district of Bonanza, Jacarepaguá.
The very personal style has won many fans in the arts, leading to Maria Bethania even a performance at Terreirão do Samba, Praça Onze, where MPB diva just came out after hearing "Dona Jove relate." Alcione already
honored the 'Black Pearl' in one of his best albums, "Profissão Cantora".
While the samba and the real party-high there will always be Jovelina remembered for the powerful voice and the swagger of the black race itself - as well as Clementina de Jesus.
Variations:
Viewing All | Jovelina Pérola Negra
Jovelina, Jovelina Perola Negra, Jovelino Perola Negra