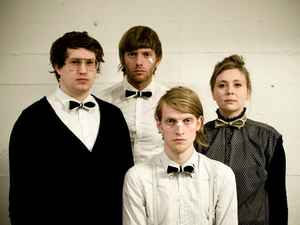 Profile:
FM Belfast started out as a duo at Christmas 2005 when Árni R. Hlöðversson and Lóa H. Hjálmtýsdóttir made a song as a present for their friends. What was initially thought of as a studio concern became a live band in the summer of 2006 when Árni and Lóa performed an art opening in a cave in the Faeroe Islands. Later that year Árni Vilhjalmsson and Örvar Þ. Smárason joined the band. In October 2006 they played their first full concert at the Iceland Airwaves festival in Reykjavik.