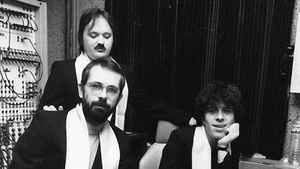 Profile:
Belgian all-electronic disco pop band.
Formed in 1978 by radio DJ/jazz musician Marc Moulin, programmer/sound engineer Dan Lacksman and vocalist Michel Moers. Expressing articulate, militant views on the essential lightness of pop, the group's tongue-in-cheek championing of disco was not always well understood at the time by the ideologically-correct rock press. Nevertheless, the group's first three singles ("Twist A Saint Tropez", "Moskow Diskow" and "Rock Around The Clock") became hits in the UK and in the rest of Europe, and a number of Telex 12"s were popular in dance clubs, especially in the USA.

During the hiatus, Marc Moulin produced many pop albums, was one of the head programmers on French-speaking Belgian national radio, and was an author and playwright. He died of cancer on 26 September 2008. Dan Lacksman runs Synsound Studios, a successful studio complex in Brussels. Michel Moers lives in Provence, France, and is a video director and professional and artistic photographer.
Sites:
Facebook, instagram.com, YouTube, web.archive.org, houbi.com
Members:
Dan Lacksman, Marc Moulin, Michel Moers
Variations:
Viewing All | Telex
Telex Eurovision, Telex...

I love how all 3 records I own from these guys contain "Moscow Diskow", "Euro-vision", and "Twist A Saint-Tropez". I think the first two are different on all three too. their catalogue is kind of a mess. especially since my favorite song of theirs "Lakele" doesn't even appear on an actual album - for the longest time you had to get a Canadian "best of" to get it. luckily it's on the expanded Neurovision CD now.

Telex completists take note.. their exists an extended version of " We Are All Getting Old", (yes there really is one !) . It can ONLY be found as the A side of an Australian 7" pressing. But wait, there's more -" En Route" is on the b-side and it's an extended version as well!!! Finally there is an extended/alternate mix (about 7 or 8 minutes in length) of "Dance To The Music ". It is on the B- side of the U.K. twelve inch for "Soul Waves"

October 3, 2020
I just found out that both iTunes and Spotify have deleted all Telex material, or hoever you call that. In shock is overstating it, but still wonder how and why that happenes.. anyone know?
See 2 replies

January 16, 2014
I'm surprised to be the first one around! Telex is one of the greatest pioneers and was much ahead of it's time and his competitors as Human League for example. It's hard to believe that his albums were made in their releasing times, the instrumentation and mixing is so advanced. The first 4 album is the thing here! Purest electro-pop all around. Analog synths, playful tunes, vocoder usage of the best kind, nothing counterfeit, no kitschy, nor rudimentatry timbres or solutions. Go and get their CDs! A good version includes double as much bonuses and extras and each every title is just as equally good as the album tracks, so suppose you get a double album on each CD. Pity, the grace lasted only for a few years. The uprosing new technology and the sampling has blinded and led them to a debatable way. Even if it's so, Telex has remained pure and ever poneering electronic band. I advice you to start with the 1st album! Highly recommended artists in the genre: YMO, Yellow Magic Orchestra, Human League, early Depeche Mode and Yazoo, Soft Cell, the Twins, and of course Kraftwerk...