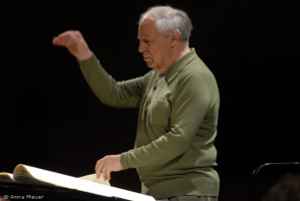 Real Name:
Pierre Louis Joseph Boulez
Profile:
French composer, conductor, writer and organiser of institutions (* 26 March 1925 in Montbrison, France; † 05 January 2016 in Baden-Baden, Germany).
.
He studied with Messiaen at the Paris Conservatoire (1942-1945) and privately with Andrée Vaurabourg and René Leibowitz, inheriting Messiaen's concern with rhythm, non-developing forms and extra-European music along with the Schönberg tradition of Leibowitz. The clash of the two influences lies behind such intense, disruptive works as his first two piano sonatas (1946, 1948) and Livre pour quatuor for string quartet (1949). The violence of his early music also suited that of René Char's poetry in the cantatas Le visage nuptial (1946) and Le soleil des eaux (1948), though through this highly charged style he was working towards an objective serial control of rhythm, loudness and tone colour that was achieved in the Structures for two pianos (1952). At this time he came to know Stockhausen, with whom he became a leader of the European avantgarde, teaching at Darmstadt (1955-67) and elsewhere, and creating one of the key postwar works in his Le marteau sans maître (1954). Once more to poems by Char, the work is for contralto with alto flute, viola, guitar and percussion: a typical ensemble of middle-range instruments with an emphasis on struck and plucked sounds. The filtering of Boulez's earlier manner through his 'tonal serialism' produces a work of feverish speed, unrest and elegance.

In the mid-1950s Boulez extended his activities to conducting. By the mid-1960s he was appearing widely as a conductor, becoming chief conductor of the BBC Symphony Orchestra (1971-1974) and the New York Philharmonic Orchestra (1971-1978). Meanwhile his creative output declined. Under the influence of Mallarmé he had embarked on three big aleatory works after Le marteau, but of these the Third Piano Sonata (1957) remains a fragment and Pli selon pli for soprano and orchestra (1962) has been repeatedly revised; only a second book of Structures for two pianos (1961) has been definitively finished. Other works, notably Eclat/Multiples for tuned percussion ensemble and orchestra, also remain in progress, as if the openendedness of Boulez's proliferating musical world had committed him to incompleteness. Only the severe memorial Rituel for orchestra (1975) has escaped that fate.

January 7, 2016
Might this otherworldly composer and great conductor rest in peace.