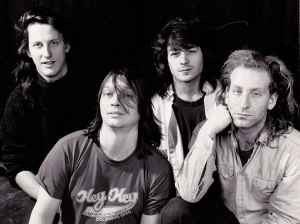 Profile:
The Neats were a Boston rock band that existed from the late 1970s to early 1990s. They first recorded for the independent Propeller label, which in 1981 released the song, "Six", a swirling, Vox-washed slab of garage rock reminiscent of Question Mark & the Mysterians. The following year, their well-received debut, 7-song EP, The Monkey's Head in the Corner of the Room, was released on Boston's Ace Of Hearts Records. It was voted one of the best EPs of 1982 in the Village Voice's annual Pazz & Jop poll.
Members:
Eric Martin (5), Jerry Channell, Phil Caruso, Terry Hanley
Variations:
Viewing All | Neats
The Neats