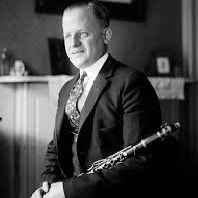 Real Name:
John Ross Smeed Gorman
Profile:
Ross Gorman was a clarinettist, saxophonist and bandleader who rose to prominence in Paul Whiteman's Orchestra and is probably best remembered today for his original playing of the opening clarinet solo in George Gershwin's "Rhapsody In Blue".

Born in Patterson, New Jersey on November 18, 1890 (or 1891, depending on the source of the year of birth), studied music with his father John R. Gorman and appeared with him & his wife Stella in vaudeville as part of the Kiltie Trio.
In 1916, he was part of a five–men group that included Vincent Lopez. In 1919, Gorman joined Harry Yerkes’s band, with whom he recorded for Columbia. In addition to his work with Yerkes's band, Gorman formed his own Novelty Syncopators (a band that of course comprised him and 3 bandmates of Yerkes's band plus Eddie Grossbart on drums) and recorded for Columbia on September 27 of 1919 two numbers, one of them was "Barking Dog".
For a while, during the first 9 months of 1920, Gorman worked with a variety of groups, among them those of Harry Raderman until he was hired by Paul Whiteman for his orchestra on late October of 1920 as replacement for Gus Mueller. He stayed with Whiteman's band from late October of 1920 to May of 1925, and during this period, in addition to premiering George Gershwin's "Rhapsody In Blue" on 1924, Gorman directed Whiteman's small jazz subset known as The Virginians (3).
After leaving Whiteman's band at the end of May of 1925, Gorman formed his own orchestra, which appeared at Earl Carroll's Vanities of 1925 revue. Gorman recorded with this band from 1925 to 1927 for Columbia (including his budget label subsidiary Harmony (4)), Edison Records & Gennett.
Gorman also worked with many bands, including that of B. A. Rolfe.
In the 1930s he did a lot of radio work and was a staff musician for NBC.
According to Ross' daughter (and only child) Sheila Gorman, the Gorman family was captivated by airships. On the afternoon of May 6 of 1937, Ross Gorman, his wife Florrie & their daughter Sheila Gorman went to the rooftop of their 43rd Street brownstone to catch the dirigible "Hindenburg" as it circled Manhattan's Times Square. Hours later, the once-mammoth marvel was reduced to smoking, twisted wreckage at Lakehurst Naval Air Station, and in the words of Sheila Gorman herself, "the Experiment in Modern Motion was as much a failure as Rhapsody in Blue was a success".