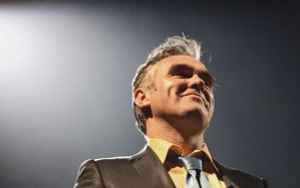 Real Name:
Steven Patrick Morrissey
Profile:
British singer and songwriter (born May 22, 1959, in Manchester, UK), best known as the former lead singer and co-founder of The Smiths with Johnny Marr. He began his music career in the late 1970s as a lead singer for punk bands. He formed Sulky Young (renamed The Tee Shirts) and later paired for a short time with Billy Duffy for a handful of live performances. In 1982, Morrissey and Marr formed The Smiths, and he remained in the band until he decided to leave in late 1987. He debuted as a solo artist in 1988.

June 14, 2020
Since joining with Etienne, Morrissey has created some powerful music. It made me wonder how much a label can affect a singer's songwriting and performance, also noticing that Morrissey has changed labels quite often. Morrissey is one of the rare performers who continues to create strong work decade after decade. The below is just about one (very recent) song . . .

Morrissey sings Love Is On Its Way Out with grand panache. Dramatic, Melodramatic and heavy with his characteristic view on what we are doing to the world (backed up with the video). The video implies the song is all about corruption, power, wealth, the lonely persecuted fox - the potential of humanity all gone wrong. But then at the end of the song changes its gaze from the herd of humanity and becomes individual, entreating the listener to reveal Love to him . . .

The lyrics are mainly pretty clear, but can anyone tell me what the end of the song means? Particularly the phrase "the wrong one" repeated. It seems to be the crux of the song and I don't get it. (Typical - the most important bit.)

Is it a tease? Throughout the song he is lamenting the demise of Love (compassion). Then at the end (round 2:20 minutes in the video) he invites the listener and sings, "before it goes, show me what Love is like, be mine and gaze with fondness on the wrong one. The wrong one, the wrong one, very powerfully repeated. Is he stating love goes wrong, attracts mismatches together, unreciprocation . . . a clue may be the grainy photo of the man at the end of the video - who is it?
See 4 replies

April 17, 2018
Incredibly talented and intelligent and creative.i read alot of reviews about how he is a bit of a knob these days.my question is-was he ever NOT a knob?
See 6 replies

October 7, 2017
I'm sure everybody has artists who everyone else seems to love but they just really don't 'get'. Morissey is that artist for me. His vocals are so bloody annoying they make me cringe! I find his music samey and whiney too, however I'll not deny he has a knack for lyrics. I guess taste is a funny thing.
See 2 replies

November 7, 2016
i listen and prefer morrissey's solo music than the smiths. I have never heard music so freeking good. I never get bored with Morrissey and never get sick of it.
See 1 reply

January 27, 2016
Morrissey, Morrissey.....Morrissey...what can I say this man is our Frank Sinatra or our Elvis Presley of our time. Love you Morrissey! Who put the M in Mexican

May 22, 2014
When it comes to artists and I don't mean groups "Morrissey" is right up there at the top with the greats. My top 5 picks would be Morrissey, David Bowie, David Sylvian, Patti Smith and Peter Murphy (Yes, Elvis is great too). Morrissey is a great performer but it is his writing, voice, soul and conviction that truly elevates him. He is very charming and should not be judged but admired for his talent. Very few artists today even have natural or real talent, it is as if they are made in a factory in Jersey.
Morrissey however is more original and more relevant now today and always. I have been a fan since the early 80's and I always return to his music every so often to remind myself of the importance of being aware.
See 2 replies

September 1, 2012
MOrrissey is Classic! He is hands down one of the most influential musicians ever.

Although some may not agree, Years of Refusal is one of his strongest works and shows the true maturity of an ever evolving and growing artist. This is rare in pop music, for an artist to get better as they age not to simply fade away as their career progresses.