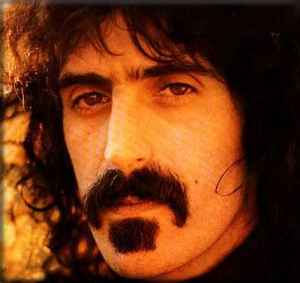 Frank Vincent Zappa was of Italian origin, his grandfather having arrived in America from Partinico, Sicily. Frank Zappa grew to be one of the most accomplished composers of the rock idiom, his music combining an understanding and appreciation for such contemporary classical figures as Igor Stravinsky, Karlheinz Stockhausen, and Edgard Varèse. These influences, coupled with an affection for late '50s doo-wop, rock & roll, and skillful guitar-heavy rock, dominated pop in the '70s. However, Zappa was also a keen satirist, whose reserves of scorn and parody seemed bottomless, and whose wicked sense of humor and absurdity continued to delight his numerous fans -- even when his lyrics crossed the broadest bounds of taste.

Zappa was a prolific record-maker, astutely producing massive amounts of music on his own labels of Bizarre Records, Straight, and Barking Pumpkin Records. And through distribution deals with Rykodisc and Rhino Entertainment Company. This after long unhappy associations with industry giants like Warner Bros. Records and the now-defunct MGM. In the '80s, Zappa gained the rights to his old albums and began to reissue them, first on his own and then through Rykodisc. Throughout his recording career Zappa stayed consistently at the forefront of technology, investing in equipment, home-studio facilities and vault storage that would enable the fullest control over production of his works.

In 1988 his official autobiography emerged and he embarked on a world tour. Sadly, that was the end of his live performing when, in late 1991, it was confirmed that Zappa was seriously ill with cancer. Nevertheless, his schedule of album releases continued to be rapid. The Zappa Family Trust (ZFT) continued with his wife Gail Zappa (aka Pumpkin (5)) as the figurehead of the ZFT, until her death in 2015. The ZFT produced numerous posthumous releases and remasters of the back catalog. The children inherited the ZFT and remain in the industry, Dweezil Zappa the force behind "Zappa Plays Zappa" as well as an accomplished guitarist in his own right; Moon Zappa, Diva Zappa and the more reserved Ahmet Zappa.

October 29, 2022
Greeks sure appreciated the genius of the one and only Frank Zappa. There's his greek brother from another mother, Γιώργος Μακρής, and my personal favorite, Ariadne MacKinnon Andrew - Naughty Dreams. Poor clones or worthy followers? Cast your votes!

For those who don't know better (but think they do): The Zappa trust was dissolved last month. As late as five-six years ago, Dweezil and Ahmet weren't on speaking terms since Ahmet threatened to sue if Dweezil continued to play their dad's music. An insightful docu was made, and I haven't heard anything since I on 18 July 2022 read that the trust is no more. Some are only in it for the money...

August 7, 2022
So his kids finally stopped fighting and sold the whole catalog to Universal for an undisclosed sum 5 weeks ago...
See 1 reply

January 29, 2019
As hard as it is to pick favorite albums from the vast Zappa catalouge, I do have to say I find "You cant do that on stage anymore Vol.2 The Helsinki concert" mindblowing! He had such a amzing band on tour at that time. Just to have Napoleon Murphy Brock, George Duke, Chester Thompson in the same band, playing at their best is just amazing. I highly recomend a listen to that CD.

If you are unfamiliar with FZ, and are looking at which albums to delve into, it will all depend on your personal musical preferences, because Frank's music spans a wide range of musical styles.

If you like straight ahead rock, try 'Chunga's Revenge', 'Zoot Allures', 'One Size Fits All', 'Imaginary Diseases', 'Apostrophe', 'Hot Rats', 'Bongo Fury', 'You Are What You Is'.

If you like rock mixed with bawdy humour, try 'Live In NYC', 'Joe's Garage', 'Sheik Yerbouti', 'Does Humour Belong In Music'.

If you like Doo-Wop, try 'Cruising with Reuben & The Jets', 'Cucamonga'.

If you like social satire, try 'Freak Out', 'We're Only In It For The Money', 'Absolutely Free'.

If you like guitar instrumental workouts, try the 'Shut Up & Play Your Guitar' series of albums.

September 22, 2018
Thanks for the all the below help for the "newbies" - which I am. I have avoided Zappa for decades, simply because there is too much, at the same time knowing I would like some (but what?).

So, now I am diving in, with the help of the below. Cheers!

May 12, 2018
A lot of Zappa's releases have been either wrongly listed or duplicated - if you are interested in this problem please consult the post i created on The Mothers master page
https://www.discogs.com/artist/286086-The-Mothers